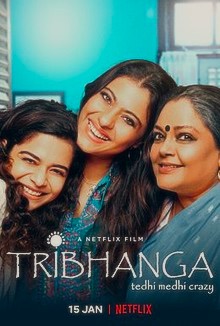 Tribhanga is a story based on social issues featuring Kajol, Mithila Palkar, and Tanvi Azmi. The movie revolves around three women from three different generations and their eccentric life decisions. It is written and directed by Renuka Shahane under the production company of Ajay Devgn FFilms, Banijay Group Asia, and Alchemy Films. The title of the story is based on a dance pose belonging to Indian classical.

The film will be streaming on Netflix from 15th January 2021. Earlier it was decided that Tribhanga will be made as a short Marathi film but however, Siddharth P Malhotra and Kajol later came up with the decision to release it on the OTT platform, Netflix.

The Netflix film Tribhanga - Tedhi Medhi Crazy is streaming now and is the digital debut of Kajol as a famous Odissi dancer and actor Anu, who resents her mother Nayan played by Tanvi Azmi whoâ€™s a writer. Added to that Masha played by Mithila Palkar who is about to have a baby is the daughter of Anu. Itâ€™s all about three different generations of mothers and daughters with a hint of humor and grace. The acting is so beautifully done that youâ€™ll fall in love with these flawed women and you'll have to keep in mind to not judge them when they fall or fail. When it comes to performance, Kajol has given her 100%. This film probably is an ode for women who are unapologetic in what they want, it will make you feel a lot of emotions and think twice about your relationship with your mother.

Tribhanga Review - A mixed bag of emotions. Stream it or skip it?
More like this
Latest on Joyadda