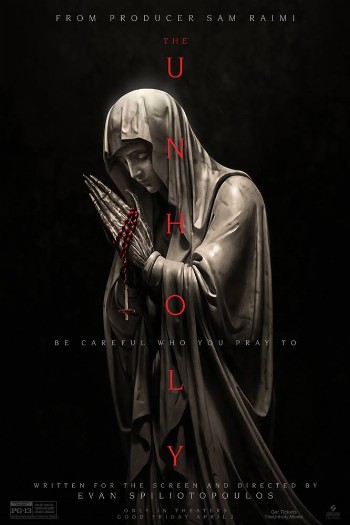 The Unholy is a 2021 American supernatural horror film. The story revolves around Alice (Cricket Brown) who is a young hearing-impaired girl and who, after a supposed visitation from the Virgin Mary, is inexplicably able to hear, speak, and heal the sick. As word spreads and people from near and far flock to witness her miracles, a disgraced journalist (Jeffrey Dean Morgan) hoping to revive his career visits the small New England town to investigate. When terrifying events begin to happen all around, he starts to question if these phenomena are the works of the Virgin Mary or something much more sinister.

The movie was not upto the mark! There were some parts where the jump-scares were on point, but still somewhere the film lacks actual thriller and horror, on which it is based. The story is just an entertainment show, to satisfy your mood. The story is unable to maintain any suspension of disbelief beyond the opening scene. To truly get into what was wrong about this attempt from a filmmaking or even a storytelling perspective, would frankly take more time than it's worth. the idea was good. But even for a horror movie this is bad writing, acting, and effects. And it's barely a horror movie, with just a few jump scares.

FAQs about The Unholy