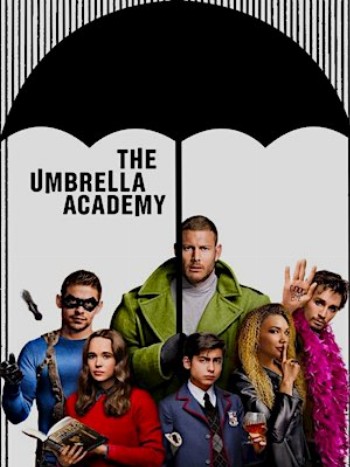 The Umbrella Academy is an American superhero streaming television series based on the comic book series of the same name written by Gerard Way. The story revolves around a dysfunctional family of adopted sibling superheroes who reunite to solve the mystery of their father's death and the threat of an impending apocalypse. The Umbrella Academy is set in a universe where 43 women around the world give birth simultaneously on 12:00 PM on October 1, 1989 despite none of them showing any sign of pregnancy until labor began. Seven of the children are adopted by eccentric billionaire Sir Reginald Hargreeves and turned into a superhero team that he calls "The Umbrella Academy." Hargreeves gives the children numbers rather than names, but they eventually are named by their robot-mother, Grace, as Luther, Diego, Allison, Klaus, Five, Ben, and Vanya.While putting six of his children to work fighting crime, Reginald keeps Vanya apart from her siblings' activities, as she supposedly demonstrates no powers of her own.

The plot is rich with suspense, drama, action, sci-fi and even a good dash of horror, and no element feels half-baked: fast-paced and exhilarating, the Umbrella Academy will have you binge-watching without stop until you reach the climactic finale. A fantastic and brilliantly conceived look into a highly dysfunctional and wonderfully funny family of superhuman children who have now grown up, whose lives have all changed for the worse: once media superstars constantly bathed in the spotlight of public attention, the members of the Umbrella Academy are split up, missing, or even dead.

It discusses important themes that are quite relevant to today's current events as Viewers are reminded that the diverse cast we love so much, face very different life situations in 60's based on their differences such as sexual orientation or race, touching on the discrimination/ injustices faced by these communities even today. The ending leaves us wanting for more as viewers come to understand there's more to the umbrella academy than we may have initially thought and sets season 3 with an expected twist to explore further in Season 3.

FAQs about The Umbrella Academy