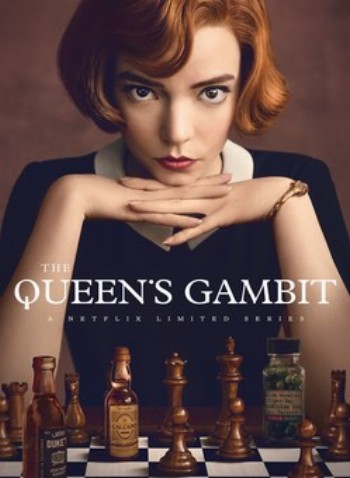 The Queen's Gambit is a 2020 American coming-of-age period drama miniseries based on Walter Tevis's 1983 novel of the same name. The title refers to "Queen's Gambit", a chess opening. The Queen's Gambit follows the life of an orphan chess prodigy, Elizabeth Harmon, during her quest to become the world's greatest chess player while struggling with emotional problems and drug and alcohol dependency. The title of the series refers to a chess opening of the same name. The story begins in the mid-1950s and proceeds into the 1960s.

The story begins in Lexington, Kentucky, where a nine-year-old Beth, having lost her mother in a car crash, is taken to an orphanage where she is taught chess by the building's custodian, Mr. Shaibel. As was common during the 1950s, the orphanage dispenses daily tranquilizer pills to the girls, which turns into an addiction for Beth. She quickly becomes a strong chess player due to her visualization skills, which are enhanced by the tranquilizers. A few years later, Beth is adopted by Alma Wheatley and her husband from Lexington. As she adjusts to her new home, Beth enters a chess tournament and wins despite having no prior experience in competitive chess.

The series' adaption of the novel being done with close following, its consistent storytelling, lack of digression from the theme, a well tied plot without any loose ends, emotional bonding with its characters, character development, all of it, as well as things mentioned above together come in a very well balanced series that to the first sight may seem difficult to think can be a marvelous show. Truly an exemplary series showcasing one of the oldest and most intellectual games in our history and the show truly pays an homage to this breathtaking game.

The passion displayed by the main character for the sport where you can see her whole world revolving around it inspires you to find your own and stick with it. The innocence of the young girl yet with no fear in her mind despite her adversities and intimidating circumstances, truly dominated the show just like her plays and leaves us with a few lessons to take. The casting/acting is spectacular. The actress who plays Beth Harmon (Anya Taylor-Joy) is, well, a joy to watch. She is able to convey so much through her eyes, countenance, body language, and gait. A really beautiful performance.
The period fashion, color, and music are also spectacularly well done!

FAQs about The Queen's Gambit