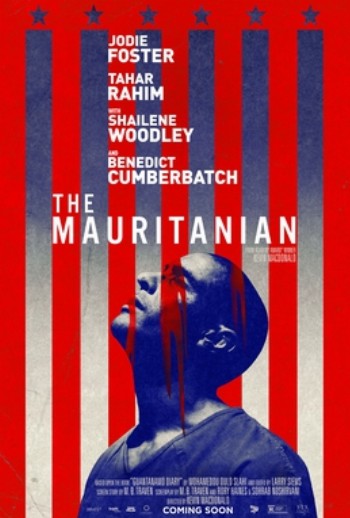 The Mauritanian is a 2021 legal drama film. The film is based on the 2015 memoir GuantÃ¡namo Diary by Mohamedou Ould Slahi, a true story of Slahi's experience of being held for fourteen years without charge in the Guantanamo Bay detention camp.

The film follows Mohamedou Ould Slahi (Rahim), who is captured by the U.S. government and is languishing in Guantanamo Bay detention camp without charge or trial. Losing all hope, Slahi finds allies in defense attorney Nancy Hollander (Foster) and her associate Teri Duncan (Woodley). Together, they face countless obstacles in a desperate pursuit for justice. Their controversial advocacy, along with fabricated evidence uncovered by formidable military prosecutor, Lt. Colonel Stuart Couch (Cumberbatch), eventually reveals a shocking and far-reaching conspiracy.

The Mauritanian is a movie based on the real life story of Mohamedou Ould Salahi. This is a have to watch movie, it takes you to places & emotions you haven't been in touch with for ages if ever. It leaves you furious & totally gobb smacked with what humans are capable of. The film does not paint a full picture of the death, destruction, and grave injustices done against innocent people over the course of the war. Such a tragic story of human rights & violation. To have so much faith, patience, strength & resilience shows how incredible Mo Salahi is.

Incredible acting performances by the entire cast. With such a tragic story of human rights violations and harrowing events, Salahi is a true inspiration of resilience, faith, and forgiveness. Rahim is incredible in his acting, at times so difficult to watch, but important to know we cannot unlearn stories like these. Gripping and riveting, ultimately inspiring.

FAQs about The Mauritanian