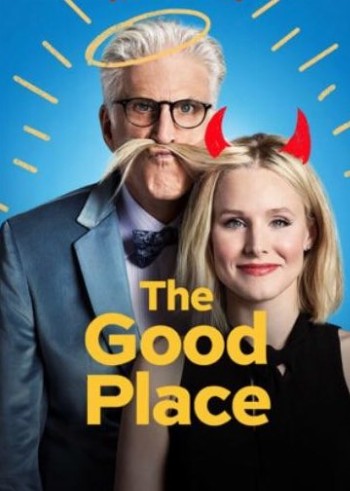 The Good Place is an American fantasy-comedy television series. The story is based on Eleanor Shellstrop (Kristen Bell), a woman, who got accepted after her death to "the Good Place", which is an extremely selective magical ideal place that is designed and run by afterlife "architect" Michael (Ted Danson) as a reward for her virtuous life. Nevertheless, she realizes that she was sent there by mistake and must keep her practically imperfect past behavior as a secret while trying to become a good and more ethical person.

The series is completely focused around an afterlife in which humans are sent to "the Good Place" or "the Bad Place" after death: all humans are given a numerical score based on the morality of their conduct in life. Only those with the very highest scores are sent to the Good Place, where they enjoy eternal happiness with their every wish granted, guided by an artificial intelligence named Janet; all others experience an eternity of torture in the Bad Place.

The story portrays the reality of life - individual struggles, chaos, rush, emotions, friendship, life, death, and whatnot. Each and every character did an outstanding job, took it to the utmost level with their acting, expressions, and humor. "The Good Place," is that show, which you are going to start watching, either by suggestion, or by randomly scrolling through Netflix, and then, before you know, you're binging on it for the next many weeks. Watching it over and over again, not because you have had trouble understanding or peeling off the plot and the narrative, but because it is undoubtedly the show that makes you feel the most effortless to watch.

The storyline is so lucid and compact, so original, so pure. There's almost nothing that lies as a fault in this show. Each character has played their role so excellently, molded into its skin that it's impossible to tell the real from the fiction. If you want a comedy reflecting on the fundamental nature of human existence that doesn't take life or itself too seriously, give The Good Place a try.

FAQs about The Good Place