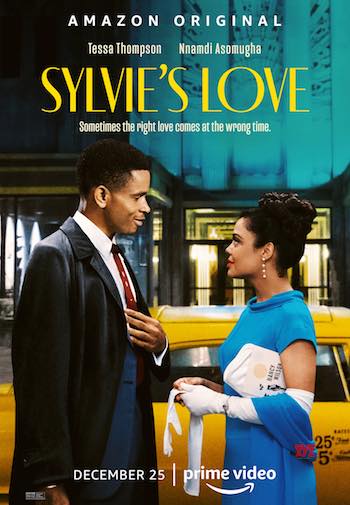 Sylvie's Love is a 2020 film that is an American drama. The film is a pleasant love story. The story revolves around the love story of Robert Halloway and Sylvie. However, when Robert enters a party, by the time when Sylvie is about to share some important information, both of them part their ways.

After a leap of five years, it is seen that Sylvie is married with someone else and has a daughter of her own. She has also involved herself in her dream job at some television studio. But it seems that fate has some other plans, when Sylvie come with a face off with Robert outside the studio.

Sylvieâ€™s Love takes you on a tour in the past reminding you of old-fashioned Hollywood love stories which are definitely going to make you fall in love again. It is written and directed by Eugene Ashe which gives your heartwarming, romantic melodrama with great characters and amazing music. Currently streaming on Amazon Prime. The story is a throwback to the year 1957 a small summer vacation turns into a romantic lie in between Sylvie played by Tessa Thompson and Robert played by Nnamdi Asomugha. Sylvie is young and her dream is to work in television and spends the most time around a record store on summer days where her father works while she waits for her fiance to return. The friendship between Sylvie and Robert began when he started working part-time at the record store. Their relationship comes to an end as time passes and summer days get over. Overtime, Sylvie becomes a successful TV producer. And then Robert and Sylvie cross paths again, where they realize the feelings for each other still remain the same, even though a lot has changed. Itâ€™s a perfect combination of romance and music. The costumes, created characters, and society politics beautifully shot gives you a warm and comforting feeling. If you love the romance genre then Sylvieâ€™s Love is to die for.