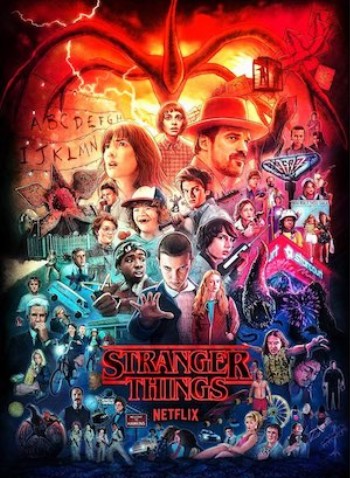 Stranger Things is an American science fiction horror streaming television series created by the Duffer Brothers and released on Netflix. The first season focuses on the investigation into the disappearance of a young boy (Will Byers) amid supernatural events occurring around the town, including the appearance of a girl with psychokinetic abilities. The second season focuses on Will's side effects from being in the Upside Down with its entities crawling into the real world. The third season focuses Eleven and Mike's relationship as the kids continue their battle against the Upside Down entities.

Stranger Things is set in the fictional rural town of Hawkins, Indiana, during the early 1980s. The nearby Hawkins National Laboratory ostensibly performs scientific research for the United States Department of Energy, but secretly does experiments into the paranormal and supernatural, including those that involve human test subjects. Inadvertently, they have created a portal to an alternate dimension, "the Upside Down". The influence of the Upside Down starts to affect the unknowing residents of Hawkins in calamitous ways.

Very fun,refreshing show with a strong sci-fi backbone for us old X-file fans. It's clear by now the writing,casting,acting,& execution of all 3 of this series seasons is top notch & an example for others to learn from.It's streamlined story telling yet never seeming rushed,with flawless threading of storylines & careful attention to their own laws of their universe. As with any popular work in any creative medium,some directions they take won't be loved by every different person,but most of what I see is praise. Even the usual people looking for flaws,anti-popular,or with a very narrow,specific taste seem to be a tiny minority,no split audience here.

The show has just enough well written romance,humor,& regular drama to make the horror & supernatural feel real. Just like slower clean acoustic parts in metal music can make the heavy fast parts seem heavier. Without the balance it would be just a another dull horror or sci-fi done before no matter the quality.This formula works.The changes in the threat each season works as well,taking inspiration from diff horror/sci-fi films then applying the shows rules for each season is a great idea. Highly recommended!!!