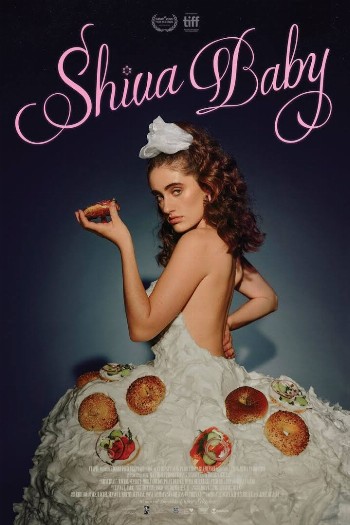 Shiva Baby is a 2020 comedy film. The story revolves around a directionless young bisexual Jewish woman who attends a shiva with her family. College senior Danielle and her sugar daddy Max have sex before she hurries to a shiva with her parents, Joel and Debbie. Before the shiva, at her aunt Sheila's house, Danielle is schooled by her mother on how to respond to questions about her disorganized life. Within the house, members of the local extended Jewish community compare her to her ex-girlfriend Maya, who is adored by the neighbors and heading to law school. Max, who is a former colleague of Joel's, arrives, and Debbie insists on introducing him to Danielle in the hopes that one of Max's relatives will hire her. They have an awkward exchange and Debbie reveals to her that he is married, shocking Danielle.

Shiva Baby is a discovery, in every sense: the discovery of a new comic voice behind the camera, the discovery of a note-perfect star in lead actor Rachel Sennott, and the discovery of a viewing experience that is at once hilarious, awkward, uncomfortable, and unforgettable. Shiva Baby is a blast of energy and from its first moment to its last Seligman finds the right balance. There is genuine suspense, if not horror; the score, by Ariel Marx, could just as easily fit a summer camp slasher flick. But the greatest feeling for the audience––after discomfort––is excitement.