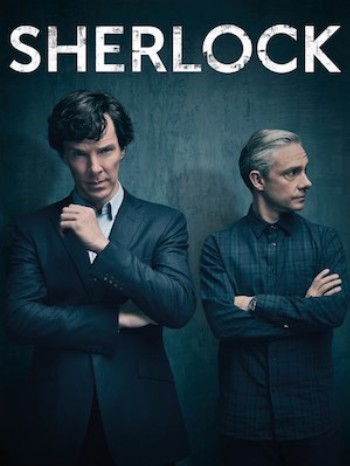 Sherlock is a British crime television series based on Sir Arthur Conan Doyle's Sherlock Holmes detective stories. The series is set in the present day, while the one-off special features a Victorian period fantasy resembling the original Holmes stories.

Sherlock depicts "consulting detective" Sherlock Holmes (Benedict Cumberbatch) solving various mysteries in modern-day London. Holmes is assisted by his flatmate and friend, Dr. John Watson (Martin Freeman), who has returned from military service in Afghanistan with the Royal Army Medical Corps. Although Metropolitan Police Service Detective Inspector Greg Lestrade (Rupert Graves) and others are suspicious of Holmes at first, over time, his exceptional intellect and bold powers of observation persuade them of his value. In part through Watson's blog documenting their adventures, Holmes becomes a reluctant celebrity with the press reporting on his cases and eccentric personal life. Both ordinary people and the British government ask for his help.

Sherlock is so powerful and outstanding that even golden globe winner Downey Junior seems lesser efficient when it comes to play Sherlock on screen. Hats off to creator Mark Gatiss & Steven moffatt their impeccable grip on script , screenplay, cast selection, cinematography, art direction, editing, visual effects ensures that this a must watch stuff. This spy thriller series is highly recommend to everyone not only for stellar performance of Benedict aka highly working sociopath but the way it is presented which made it totally unmissable. A spy crime thriller with cringe worthy & captivating storyline & stellar performances is a must watch.

It has the thrill of the chase, the mysteries for all the world to solve and the truth for everyone to see (but only one person can, You Know Who), it can make you laugh and unexpectedly, can make your eyes filled with tears on occasions and it just carries you with its flow and you don't realise when you fell in love with it. It is not a show with just thrilling moments and acts of brilliance, it has the element of character flaws which both normal and extraordinary people have and how they compliment each other to fight against the demons both outside and inside, and develop an unprecedented bond which is just so worth-loving and awe-inspiring.