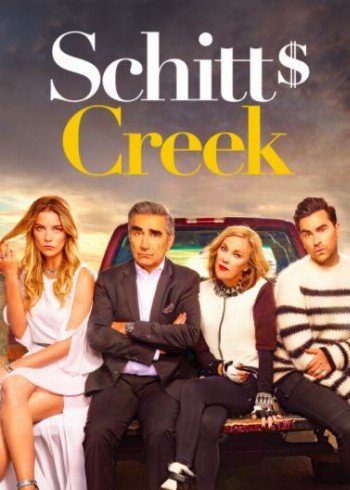 Schitt's Creek is a Canadian television sitcom. The story is based on the erstwhile wealthy Rose family's trials and tribulations. When the manager of Rose's business misuses the family business, Rose Video, the family suffered the lose of its fortune and relocates to Schitt's Creek, a small town they once purchased as a joke.

The wealthy Rose familyâ€”video store magnate Johnny (Eugene Levy), his wife and soap opera actress Moira (Catherine O'Hara), and their adult children David and Alexis (Dan Levy and Annie Murphy)â€”lose their fortune after being defrauded by their business manager. They are forced to rebuild their lives with their sole remaining asset: a small town named Schitt's Creek, which Johnny had bought for David as a joke birthday gift in 1991. The Roses relocate to Schitt's Creek, moving into two adjacent rooms in a run-down motel. As the family adjusts to their new lives, their well-to-do attitudes come into conflict with the more provincial residents of Schitt's Creek, including mayor Roland Schitt (Chris Elliott), his wife Jocelyn (Jennifer Robertson), and the motel's manager Stevie Budd (Emily Hampshire).

Concept wise, Storyline is perfect. It is generally based on one line idea of a rich family getting broke and finally having to live in a sad place called Schitt's Creek. The story will make you cry, it will teach you love, compassion, gratitude but most importantly it will teach you that no matter what life throws at you if you have your family by your side and they believe in you you can get back at you feet again and show the world what you are capable of doing.

This show is a hidden treasure. When people think they have seen something special that got them through a tough day or a bad mood, they talk about it and this is how Schittâ€™s Creek came out in the open as a one of a kind comedy. It doesnâ€™t hook you up to it right when it starts like the horror thriller genre but it takes itâ€™s time delivering that perfect bit of comedy which will get you through the week. Every time you think about it youâ€™ll give out a hearty chuckle.