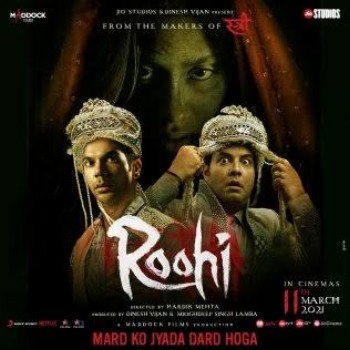 Roohi is a 2021 released Indian Hindi-language movie based on comedy horror genre. Directed by Hardik Mehta and produced by Dinesh Vijan under the banner Maddock Films, the story revolves around the portrayal of a ghost who kidnaps brides on their honeymoons.

The story kickstarts with two smallâ€‘town boys, named as Bhaura and Kattanni which are portrayed by Rajkummar Rao and Varun Sharma. They come across a girl called Roohi, the character that is represented by Janhvi Kapoor. Due to strange circumstances both the boys are stuck with Roohi in a forest.

Roohi has turned out ti be quite a good entertaining story. Especially the chemistry between two friends rajkumar rao and varun sharma is really awesome. Their talks will definitely make you laugh till the end. Would have been more good if little bit of neat romance is added. But overall good performances.

Janhviâ€™s acting was simply amazing. The storyline is to the point and the plot was good as well. The message given out was very good. The screenplay, acting and the entire story plot was to the point. After Stree, Roohi has definitely proved to be a good comedy-horror movie. The narration was good enough. Recommended to everyone.