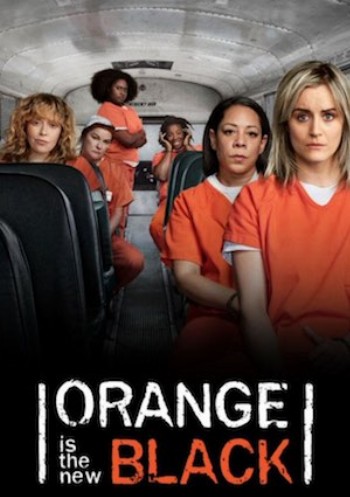 Orange Is the New Black (sometimes abbreviated to OITNB) is an American comedy-drama streaming television series. The series is based on Piper Kerman's memoir, Orange Is the New Black: My Year in a Women's Prison (2010), about her experiences at FCI Danbury, a minimum-security federal prison.

The series begins revolving around Piper Chapman (Taylor Schilling), a woman in her thirties living in New York City who is sentenced to 15 months in Litchfield Penitentiary, a minimum-security women's federal prison in upstate New York. Chapman was convicted of transporting a suitcase full of drug money for her girlfriend Alex Vause (Laura Prepon), an international drug smuggler. The offense had occurred 10 years before the start of the series and in that time Chapman had moved on to a quiet, law-abiding life among New York's upper middle class.

Orange is the New Black Cast

The entire production is outstanding. The narrative episode to episode is seamless. The casting is sensational. As each season goes by the series becomes more addictive and maintains it's integrity. It's witty and gritty. The final season brings complete closure. This is one of the very best in it's genre. It's beyond cool. The writing is BRILLIANT! Each character had their own distinctive qualities and realistic character development throughout the seasons.

Orange is the new black is a deep and satisfying series. This show is fantastic, it hits you hard at times and makes you realize that our prison system needs to be overhauled so people have a chance to succeed once they get out. The stories and the pasts behind the characters are well written and the actors are awesome. All the characters of this movie played their role very well. In the end of every season you will be eagerly waiting for the new season to come. You will miss each character when they gone.

FAQs about Orange is the New Black