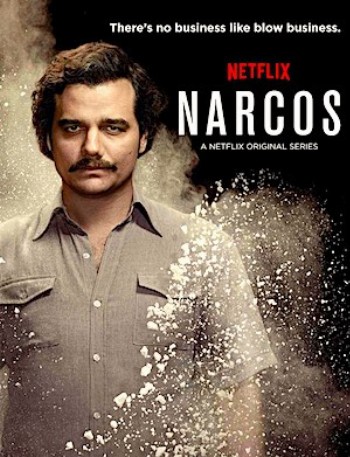 Narcos is an American crime drama television series created and produced by Chris Brancato, Carlo Bernard, and Doug Miro. Set and filmed in Colombia, seasons 1 and 2 are based on the story of drug kingpin Pablo Escobar, who became a billionaire through the production and distribution of cocaine. The series also focuses on Escobar's interactions with drug lords, Drug Enforcement Administration (DEA) agents, and various opposition entities.[1][2] Season 3 picks up after the fall of Escobar and continues to follow the DEA as they try to shut down the rise of the infamous Cali Cartel.

The show is told from the perspective of Steve Murphy, an American DEA agent working in Colombia. The series depicts how Escobar first became involved in the cocaine trade in Colombia. He was an established black marketeer in MedellÃ­n, moving trucks of illegal goods (alcohol, cigarettes, and household appliances) into Colombia during a time when this was strictly forbidden, when he was introduced to Mateo "Cockroach" Moreno, a Chilean exile and underground chemist, who pitched the idea that they go into business together, with Moreno producing and Escobar distributing a new, profitable drugâ€”cocaine.

This show is very engaging and respectful to its source material, even at points choosing narrate directly to the audience about real events. This manages not to feel disconnected as the narration between episodes is used throughout and the discussed events quickly link back to the plot. Narcos also manages to avoid the pitfalls of other shows on the same subject by choosing not to glorify the actions of the cartels or police force;showing bad actions as bad and vice versa while choosing to give humanity to the characters and providing motives to there actions giving the story a far more rich and three dimensional quality.

The first two series repeatedly empithise the idea that good and bad are relative concepts . However the 3rd series' transition to the cali cartel and intoduction to new characters while losing the previous series protagonist can feel jarring at first but this issue soon subsides as the story and characters still remain loyal to history and are easy to become reinvested in. The show also hosts some brilliant performances. The cinematography is also consistently good using strong establishing drone shots over the slums of Bogata and using action shots that follow the charters though the conflicts. Detailed and well narrated masterpiece!