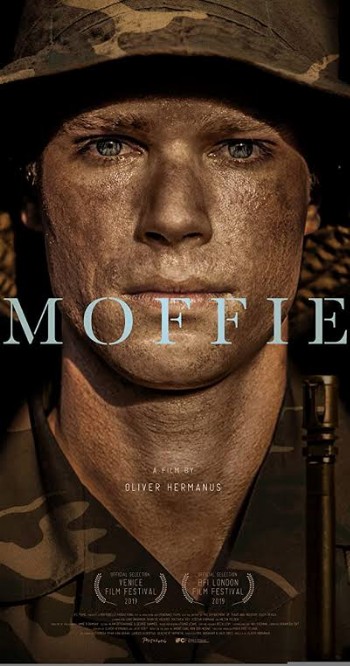 Moffie is a South African-British biographical war romantic drama film co-written and directed by Oliver Hermanus. The plot revolves around two gay characters Nicholas van der Swart and Dylan Stassen who attempt to come to terms with their homosexuality. The film is based on the autobiographical novel of the same name by Andre Carl van der Merwe. The film is set in 1981 South Africa and presents the story of a gay teenager completing his compulsory military service with the South African Defence Force on the border with Angola.

South Africa's white minority government is embroiled in a conflict at its border with Communist-led Angola. All fit South African white males between 17-60 must complete two years of mandatory military service- Conscription-conducting incursions into Angola followed by annual Commando camps, both training and operational. The Conscription applied to South African nationals but certain groups such as British passport holders (and others with dual nationality) could seek exemption.

â€œMoffieâ€ is one of those films where youâ€™ll get more out of it if you bring a specific nostalgia for, or firsthand cultural experience of, what takes place in its story. Director Oliver Hermanus employs the technique of purposely leaving all emotion out of the film, opting instead to attempt an evocation of Stanley Kubrick in feeling and Terrence Malick in visuals. This grueling film about the South African military going to war with Angola is replete with vicious, stark depictions of racism and homophobia.

The filmmaking is strong and confident throughout, while Mr. Brummer's performance is a constant revelation. This is a gentle beauty of a film with impressive work from a young cast.