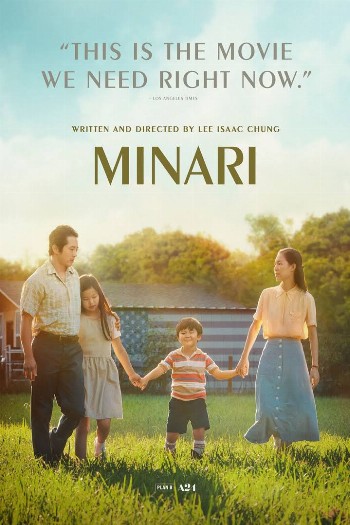 Minari is an American drama film. A semi-autobiographical take on Chung's upbringing, the plot follows a family of South Korean immigrants who try to make it in the rural United States during the 1980s.

In 1983, the Korean immigrant Yi family moves from California to their new plot of land in rural Arkansas, where father Jacob hopes to grow Korean produce to sell to vendors in Dallas. One of his first decisions is to decline the services of a water diviner and he digs a well in a spot he finds on his own. He enlists the help of Paul, an eccentric local man, and Korean War veteran. While Jacob is optimistic about the life ahead, his wife Monica is disappointed and worries about their son David's heart condition; due to this he is frequently told not to run. Jacob and Monica work sexing chicks at the nearby hatchery and argue constantly while David and his sister Anne eavesdrop.

The movie and the storyline were so well written. This film captures a family of immigrants who came to America for a better life and the struggles that they faced moving to America. Minari is a gentle story but entwined with heartbreaking realism and personal decisions. The film is intimate, yet astoundingly loud for those who come from immigrant families. Minari is a beautiful picture that, unlike current mainstream cinema, makes you review the beauty you live in once you walk outside. Please, take the opportunity to see life beautifully again if you have forgotten how - this movie will inspire you.