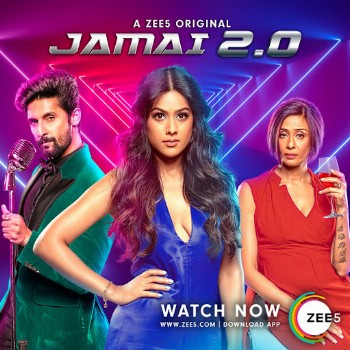 Starring Nia Sharma and Ravi Dubey, Jamai 2.0 is the sequel to their popular TV show of 2014, Jamai Raja. The first season was all about how the character of Ravi Dubey aka Siddharth makes attempts to his level best to mend Roshni, aka Nia, and her mother's relationship.

The second one revolves around Roshni and Siddharth and how they take their relationship ahead despite having major differences. The story will be filled with lots of drama, mystery, and many more revelations. Durga Devi aka Achint Kaur, will be seen running a criminal syndicate at Puducherry.

Ravi has performed brilliantly as it was very difficult to know what is the truth. His character Sid is charming, loving, and funny. Lia surely lives up to her title of third sexiest Asian Woman. Looking at the performance, Ravi, Nia and Achint have done a great job and you'll find it a very engaging and entertaining series. The story revolves around a stand-up comedian in a nightclub which is owned by Durga Devi. Sid wants to destroy DD. Roshni is DD's daughter as she has issues with her mother Sid uses her as a pawn. You have to watch this movie to find out how he plans to take his revenge. This revenge thriller will keep you engaged till the end as it is not at all predictable. The series has done a good job in its cinematography and it has a good quality production.