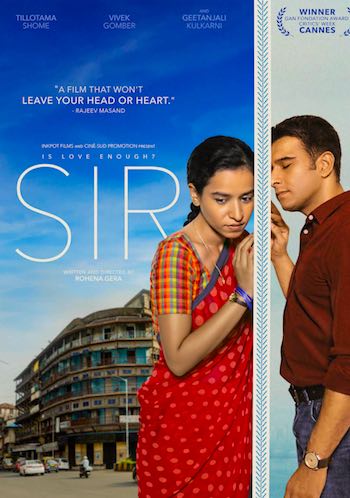 Is Love Enough? Sir is a story that is based in the city of Mumbai. It depicts the story of Ratna aka Tillotama Shome, who is a widow, working as a maid. She really works hard to support her family. Apart from working as a maid, she has a dream of becoming a fashion designer. Ashwin, who later employs Ratna to work at her place, breaks his marriage under certain circumstances.

Ashwin on the same side always admired being a writer. He left New York and came back to Mumbai when he gets to know that his brother's health is not well. The bond and the relationship shared between them is the true gist of the story.

The story marks the essence of simplicity at its best. The way the story has been depicted is highly commendable and a masterpiece of its own. Tillotama has delivered stunning performance for her respective role. She portrays a wide range of emotions with minimal dialogues. In the same way Vivek Gomber has also portrayed a heartwarming performance.

The direction of the movie is done amazingly. Everything looks extremely real which is the best part of the story. This film actually proves one of the best films that has been created on the theme of love realities. A must watch movie for everyone.

Sir: The winner of 19th Annual New York Indian Film Festival streaming on Netflix
More like this
Latest on Joyadda