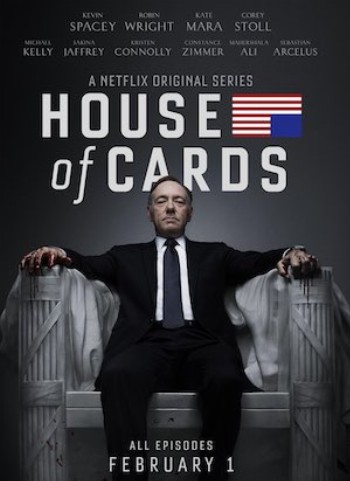 House of Cards is an American political thriller streaming television series. It is an adaptation of the 1990 BBC series of the same name and based on the 1989 novel of the same name by Michael Dobbs. House of Cards is the story of a Congressman Frank Underwood (Kevin Spacey), a Democrat from South Carolina's 5th congressional district and House Majority Whip, and his equally ambitious wife Claire Underwood (Robin Wright). Frank is passed over for appointment as Secretary of State, so he initiates an elaborate plan to attain power, aided by Claire. The series deals with themes of ruthless pragmatism,manipulation, betrayal, and power.

House of Cards Season 5 is all about Politics. Politics is like a chessboard. But with a difference. In the real world, politics is played by human beings. In politics, human beings become the pieces of the board. And strangely few of the pieces also become the players of the game. There are many similarities in both. At the same time, there are many differences too. Emotions have no place in real politics. That is what House of Cards Season 5 conveys. Rather, it is like a war every moment you spend in politics. The best or the worst part is you never know what is going to happen next moment.

This Emmy and Golden Globe-winning political drama has a lot of thrill, suspense, and climax in store for you. In fact, every moment brings in a new climax. The other lead cast includes Robin Wright and Kate Mara. Probably this is one of the best creations of Beau Willimon and he will be known for it for years to come. Power, politics,planning,plotting,patience,persistence,ambition,betrayal,corruption,scandals,thrills,mystery,emotions,intelligence, analytics, ruthless all in one show. Its the best drama series ever made.

FAQs about House of Cards