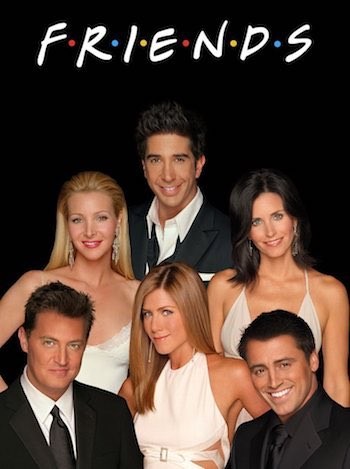 Friends is an American television sitcom, which revolves around the life journey of six friends; Rachel, Ross, Monica, Chandler, Joey, and Pheobe. The episodes portray the friends' comical and romantic adventures and experiences along with their career issues. The six characters come across many dates and serious relationships, such as Monica with Richard Burke and Ross with Emily Waltham. However, Ross and Rachel's not-continuous relationship is the most central and the leading storyline; during the entire ten seasons of the show, where they, again and again, date and break up.

Over the course of the series, Ross however marries Emily (which lasts for a shorter duration), Ross and Rachel have a child together after a one-night stand, Chandler and Monica date and marry each other, and Phoebe marries Mike Hannigan. Other frequently repeatedly occuring characters include Ross and Monica's parents Jack and Judy Geller from Long Island; Ross's ex-wife Carol Willick, their son Ben Geller, and Carol's lesbian partner Susan Bunch; Central Perk barista Gunther; Chandler's extremely annoying and obnoxious but good-natured ex-girlfriend Janice Goralnik; and Phoebe's evil twin sister Ursula

This show is the best sitcom ever to be shown on tv. Whenever you feel stressed or overloaded with work and need a stress reliever, just watch one or two episodes & that's it! The series actually teaches us not to be too much serious in life, be simple, be cool and trust in ourselves. All the characters in the series have distinct qualities, everyone has got some weird habits and style but that's what it teaches us, no matter how distinct you look in the crowd you should value your own specialty and not judge yourself with others.

If you are in search of a comedy show melded with impeccable comedy and alluring romance, your quest ends here! Friends is undoubtedly one of the finest and most admired sitcoms ever aired on Television. Without any doubt, the show is an absolute delight constituted with exquisite romances and amusing comedy. If you're way too warm-hearted and also wish to chuckle, this series will definitely fit your slot! After watching out all the series, you will definitely get the feeling that as if you were one among them. The show has such a bundle of emotions that it will connect you to the extreme core