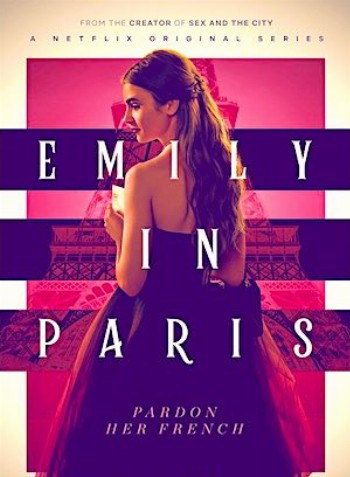 Emily in Paris is an American comedy-drama streaming television series. The series features Lily Collins as the eponymous Emily, an American who moves to Paris to provide an American point of view to a French marketing firm. There, she try her best by making attempts to succeed in the workplace while searching for love and experiencing a culture clash with her "boring" and mundane Midwestern U.S. upbringing. This girl moves to Paris, and discovers beauty, so much, but also faces a lot of opposition. She never gives up though, and never changes who she is, just continues with being herself, with class.

However, she meets Gabriel (Lucas Bravo), a chef who lives in her apartment building who helps her find her way, as well as a new friend, Mindy Chen (Ashley Park), who's hiding out in Paris as a nanny following a disastrous TV talent show appearance and Gabriel's very sweet girlfriend Camille (Camille Razat), who also becomes Emily's friend.

The central character Emily is just spell-bounding, you will definitely itch for the feeling of being a solution finder then the onlooker of problems, this mood of yours will be consistent for a day or two, but I think it delivers one of the most important messages of being one. This could be a classic for people who leave their own country and are settling in another. It's a perfect combination of humor, cliches, chemistry, mistakes and friendship. The fact that Emily goes above and beyond with her work and is determined to impress her new boss shows how much meticulous she is with her work. The awkwardness and loneliness is described just perfectly.

It's a great show to watch if you want to escape into a fun world and explore Paris while sitting at home. The events change often, and you never expect what's going to happen in the next episode. Emily in Paris is a lesson of class as well and of a good taste. It's a refreshing watch full of comedy, drama, romance, great fashion, good food, and picturesque locations.

FAQs about Emily in Paris