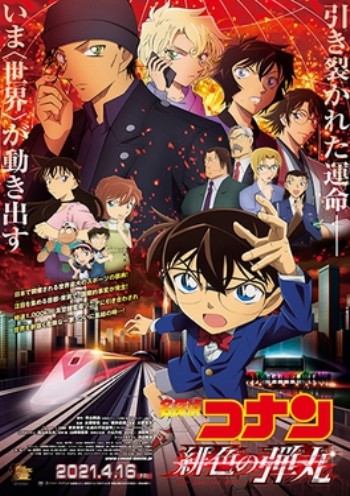 Detective Conan: The Scarlet Bullet (Meitantei Konan Hiiro no Dangan) is a 2021 Japanese animated mystery film. It is the twenty-fourth installment of the Case Closed film series based on the manga series of the same name by Gosho Aoyama, following the 2019 film Detective Conan: The Fist of Blue Sapphire. This is the first Reiwa-era Case Closed movie.

Japan is preparing to commemorate the World Sports Games, the worldâ€™s biggest sports games, hosting them in Tokyo. The Hyperlinear bullet train, the pinnacle of Japanâ€™s advanced technology, will begin operation to coincide with the WSGâ€™s opening ceremony, running at speeds of up to 1,000 km/h between Shin-Nagoya Station and Tokyoâ€™s newly built Shibahama Station. As the world watches, disaster suddenly strikes the host venue, where the sponsors of the Games are gathered. A crisis unfolds as several industry leaders are kidnapped in quick succession. In the shadows, Shuichi Akai waits, watching the crisis unfold, as FBI agents await his orders. Conan deduces the connection between the terrible WSG-related kidnappings that occurred in Boston, 15 years earlier, and it is revealed the investigation was handled by the FBI back then.