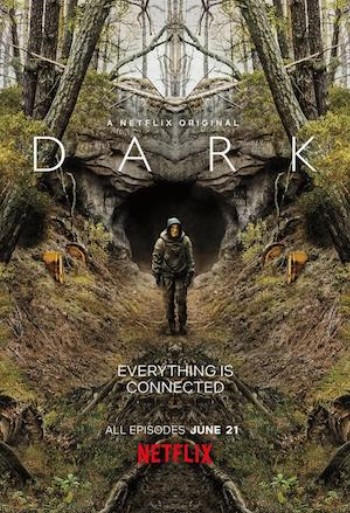 Dark is a German science fiction thriller streaming television series co-created by Baran bo Odar and Jantje Friese. It ran for three seasons from 2017 to 2020. In the aftermath of a child's disappearance, Dark follows characters from the fictional German town of Winden as they pursue the truth. They follow connections between four estranged families to unravel a sinister time travel conspiracy which spans several generations. The series explores the existential implications of time, and its effect on human nature.

During the first season, secrets are revealed concerning the Kahnwald, Nielsen, Doppler, and Tiedemann families, and their lives begin crumbling as their ties are exposed. The conspiracy involves the missing children and the history of the town and its citizens.

There can be nothing like DARK ever.A true masterpiece of time travel, story telling, stellar cast, stellar acting, stellar music and what else. All in all, the casting deserves a whole lot of praise - it meant they didn't just have to stick to gimmicky hairstyles for viewers to remember who was who. Dark is different from any other Time-travel movie or series it takes time as an element which nothing has used before like it. the creators did a excellent job of storytelling and keeping the plot together and shocking us every episode. The plot of the series is quite complicated but if you have watched it entirely then to there will be some details that you have missed .Its one of the rare series that makes you completely lose your mind and doesnot let to stop thinking about the things you saw all in all the show lacks some humour as there are many adult plot points invloved but not to say as the show lives upto its name as its dark in many ways.