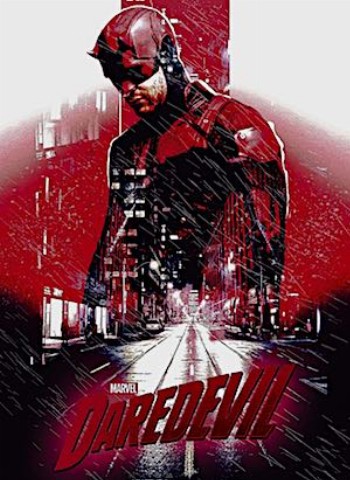 Marvel's Daredevil, or simply Daredevil, is an American television series. It is set in the Marvel Cinematic Universe (MCU), sharing continuity with the films of the franchise, and is the first in a series of shows that lead to The Defenders crossover miniseries.

The first season sees lawyer-by-day Matt Murdock use his heightened senses from being blinded as a young boy to fight crime at night on the streets of New York City's Hell's Kitchen neighborhood as Daredevil, while uncovering a conspiracy of the criminal underworld being led by Wilson Fisk. In the second season, Murdock continues to balance life as a lawyer and Daredevil, while crossing paths with Frank Castle / Punisher, a vigilante with far deadlier methods, as well as the return of an ex-girlfriendâ€”Elektra Natchios. In the third season, after Fisk is released from prison, Murdock, who has been missing for months following the events of The Defenders, reemerges as a broken man and must decide between hiding from the world as a criminal lawyer, or embracing his life as a hero vigilante.

Daredevil being such a strong premise has been beautifully justified in this series! The storyline has been so immaculately written and portrayed in the screenplay that it will satisfy your artistic appetite as a movie/series buff! The screen time that has been allotted to the character development of the lead cast and their nemesis will just make you glued to the screen with awe! There is not a single dull moment in any of the 39 episodes of the 3 seasons and the storyline keeps you intrigued and hooked in anticipation as to what comes next! It Probably has the best fight scenes in TV history.

This series gives you life lessons that you will hold on to till your last breath! Overall, Amazing Show, Jaw-Dropping action scenes accompanied by compelling characters and pitch-perfect casting daredevil is an artistic masterpiece in the MCU Netflix you just can't afford to miss. For a superhero fan or even a casual viewer this is the best superhero show you could ask for!