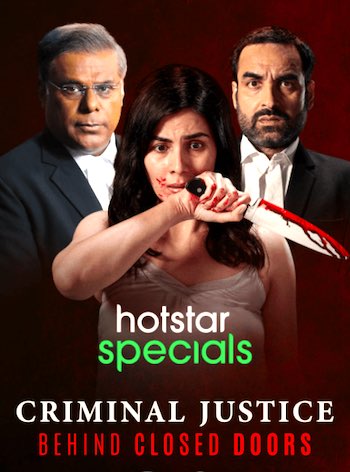 Criminal Justice: Behind Closed Doors revolves around Anuradha Chandra (played by Kirti Kulhari) as a simple and doting mother and a homemaker who has been arrested for the murder of his lawyer husband, who also seems to have a very good reputation of being one of the best lawyer and a loving father to his teenage daughter. But as you say all that glitters is not gold, so you can feel from the start that something is wrong with their relationship. Anuradhaâ€™s character has been portrayed as a person suffering from depression and having an extramarital affair with his doctor. On one fateful night, Anuradha stabs his husband and the only key witness to that crime was their teenage daughter

A Lot of expectations were speculated for season 2 after the success of its first season starring Pankaj Tripathi, Vikrant Massey, and Jackie Shroff as its lead characters. The first season was high in drama with a gripping storyline and power-packed performances by all the actors. Whereas season 2 lacks to make a mark this time. The story moves very slowly and often becomes unbearable for the audience.

The story seems to be simple but failed to justify its actual storyline about marital rape and domestic violence instead it looks like an extramarital affair plot. The character took very long to open up which makes the plot very boring at times. Even with such a strong cast like Deepti Naval, Kirti Kulhari, Mita Vashist, and above all a strong and flawless performance by Pankaj Tripathi as Anuradhaâ€™s lawyer, the story still fails to create any magic on screen.