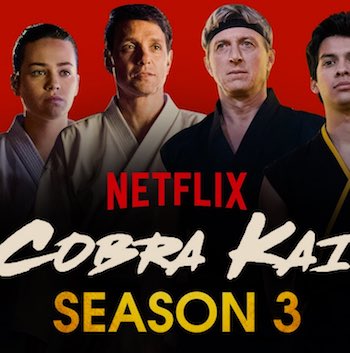 Cobra Kai Season 3 got released on January 1, 2021. It features Ralph Macchio, William Zabka, Xolo Mariduena. The third part is based on the time period that changed the lives of the characters after the tournament. It comprises of 10 episodes in total. It follows the relationship of the Karate Kid.

Apart from action sequences, the story also involves many emotional scenes. It is created by Josh Heald, John Hurwitz, Hayden Schlossberg. It is composed by Leo Birenberg, Zach Robinson. It is produced by Katrin L. Goodson, Bob Wison.

Cobra Kai season 3 also proved to be a big hit just like its season 1 and season 2. The scenes are extremely spectacular and outstanding as well as some heartfelt emotionally fight scenes. The characters portrayed in the show are too much amazing and absolutely perfect in every way. They are stupendous with their own respective personalities.

Everyone needs to give the show a watch definitely. It is one of the best tv shows of this era because of its creative and unique story. The season will definitely bring you at the edge of your seat. Apart from all this there are also darker themes involved in the show which makes it more amazing. The season is highly recommended that you should not skip out.