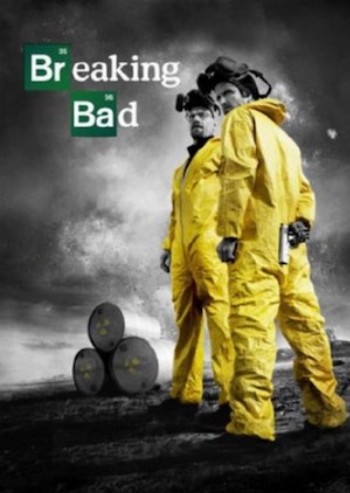 Breaking Bad is an American neo-Western crime drama television series.The show is based about the story of Walter White (Bryan Cranston), an underpaid, overqualified and dispirited high school chemistry teacher who is struggling with a recent diagnosis of stage-three lung cancer. White turns to a life of crime, partnering with his former student Jesse Pinkman (Aaron Paul), by producing and distributing crystal meth to secure his family's financial future before he dies, while navigating the dangers of the criminal underworld. According to Gilligan, the title is a Southern colloquialism meaning "to raise hell".

Initially making only small batches of meth with his former student Jesse Pinkman in a rolling meth lab, Walter and Jesse eventually expand to make larger batches of a special blue meth that is incredibly pure and creates high demand. Walter takes on the name "Heisenberg" to mask his identity. Because of his drug-related activities, Walter eventually finds himself at odds with his family, the Drug Enforcement Administration (DEA) through his brother-in-law Hank Schrader, the local gangs, the Mexican drug cartels and their regional distributors, putting his life at risk.

Once you start watching Breaking Bad from Season 1, it will feel a bit slow but gradually as the story progresses, it becomes strongly addictive just like any drug. The way character of Walter White develops over the seasons from being a normal Chemistry Prof to Drug Lord at the end is commendable. The show creator have not provided any reset button for the protagonist to go back and being good, like in some other shows, which also makes this show unique. The protagonist has many flaws, still you will not have option but to love him because of its brilliant portrayal by Bryan Cranston.

The other supporting actors especially the ones who play Gus Fring, Saul Goodman, Hank Schrader and Skyler White respectively have done commendable job. The dynamics between the characters, the rich world that they've been put it, how it blends the lines of something sketchy that benefits Walter and his family, to a black hole of senseless crime and profit, it's addicting as all hell.