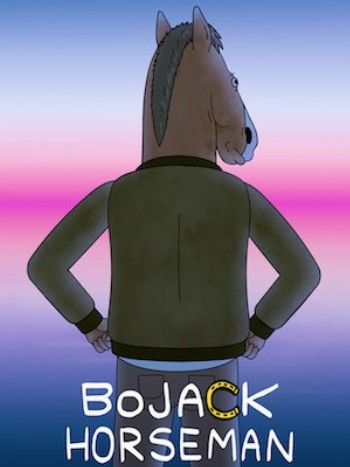 BoJack Horseman is an American adult animated tragicomedy sitcom created by Raphael Bob-Waksberg. Set primarily in Los Angeles, the series tells the story of an anthropomorphic horse named BoJack Horseman (Arnett), the washed-up star of a 1990s sitcom who plans his return to celebrity relevance with an autobiography to be written by ghostwriter Diane Nguyen (Brie). He also has to contend with his agent Princess Carolyn (Sedaris), roommate Todd Chavez (Paul), and former rival Mr. Peanutbutter (Tompkins), as well as his struggles with depression and addiction.

The series is set in an alternate world where humans and anthropomorphic animals live side by side, taking place mostly in Hollywoo (the name is changed after the D is stolen from the sign). BoJack Horseman is the washed-up star of the 1990s sitcom Horsin' Around, which centered around a young bachelor horse trying to raise three human children who had been orphaned.

An excellent show!!!The characters are so well written, the cast is magical and the dialogues literally just flow like butter.The animation is so well done, both in a comedic and a dramatic sense. Bojack is a reminder that yes, life is complex! And that you canâ€™t choose where you come from but you can choose where you go from there.Bojack is hopeless and lethargic at the start, and seeing his journey from there to how he matured, understood his problems and mistakes, is somewhat a joy to watch.

The writing is smart and quick, and the character arcs are very well done. The relationships grow in very interesting ways and its never just all uphill. Basically, its emotional, witty, and something I think everyone should at least try. You won't regret it. Even though it's a cartoon with anthropomorphism and many bizzare scenes, It's so real and familiar.