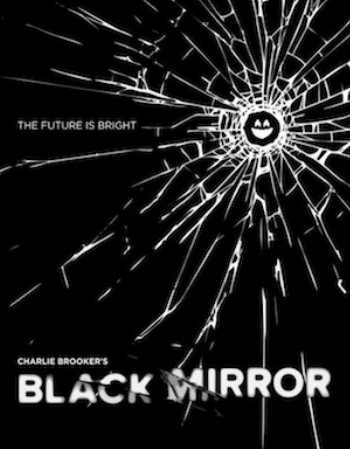 Black Mirror is a British dystopian science fiction anthology television series. It examines modern society, particularly with regard to the unanticipated consequences of new technologies. Episodes are standalone, usually set in an alternative present or the near future, often with a dark and satirical tone, although some are more experimental and lighter.

Black Mirror was inspired by older anthology series, such as The Twilight Zone, which Brooker felt were able to deal with controversial, contemporary topics with less fear of censorship than other more realistic programmes. Brooker developed Black Mirror to highlight topics related to humanity's relationship with technology, creating stories that feature "the way we live now â€“ and the way we might be living in 10 minutes' time if we're clumsy."

Terrific and outstanding show and the way most episodes are done is very futuristic and this show has actually predicted certain things that's gonna happen or already has happened which is a bit too much but also awesome. Brooker has created a sublime science fiction drama anthology. The entire production is superbly crafted. The casting is sensational. The series is a tapestry of futuristic and modern-day stand alone tales that are perplexing and full of satire. Using technology as a source of paranoia, the stories explore the collective anxious state of mind of the world. Each story features it's own cast of prodigious and mystifying characters.

Each story features it's own cast of prodigious and mystifying characters. It's a refreshing look at how technology can turn on society when in today's world people feel like they're missing out on or aren't part of something bigger if they're not participants in social media. It also explores the theory of human dynamics at a base level, i.e. if we as human beings can not connect then nothing else in the world matters such as social media. BM eclipses the cool factor.