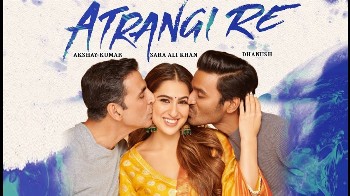 Atrangi Re is an upcoming Indian romantic drama film. Aanand L Rai's love story is set in two eras and Sara Ali Khan will be seen romancing both Akshay Kumar and Dhanush. The film is set in Bihar and Madurai.

The makers of the movie could've been more focused on the romantic portions. There are too many changes in the narrative, which makes the movie a bit disjointed.

The first half is good - it is somewhat different and fresh. The scenes between Rinku and Vishu have some spark to them. But the second half disappoints. It has several uninteresting elements, especially towards the climax. Also, there's too much repetition of songs in the film, and at one point, I started counting how many times a particular song was played during a chase sequence!

FAQs about Atrangi re