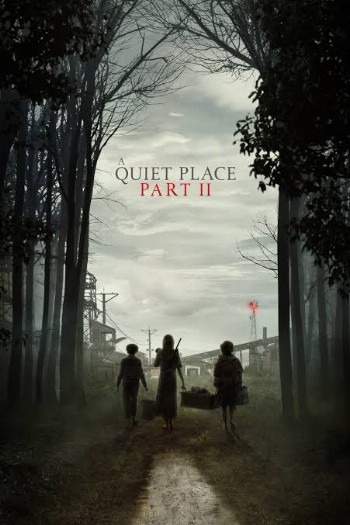 A Quiet Place Part II is a 2020 American horror film and the sequel to the 2018 film A Quiet Place, both of which follow a family that is forced to navigate and survive in a post-apocalyptic world inhabited by blind monsters with an acute sense of hearing.

Following the deadly events at home, the Abbott family must now face the terrors of the outside world as they continue their fight for survival in silence. Forced to venture into the unknown, they quickly realize that the creatures that hunt by sound are not the only threats that lurk beyond the sand path.

The movie starts exactly where part 1 was ended, A Quiet Place Part 2 is a sequel of A Quiet Place where the family fight against the horrific events of the monster attacking them, and the only way to find out about them is by following sound without making any noise. The part starts there exactly the family get to know that there wasnâ€™t the monster in their home but now they have to face it outside the world. The plot of the movie is really simple they fight against the monster without making sound and collecting items.

The theme of the movie is horror and completely justifies by the makers. Following part one, the second part is also based on a background score where almost all film characters have to communicate with signs and actions. The actors completely justify their part and made the audience understand what they were trying to say. The storyline, Direction, and Acting are the master strokes of the movie. After part one, part two also gives the same impact of the monster idea and imagination in viewers mind which thriller you with excitement and want to fight with them. The movie is directed by John Krasinski who is the complete successful shipman of the movie.

FAQs about A Quiet Place Part 2