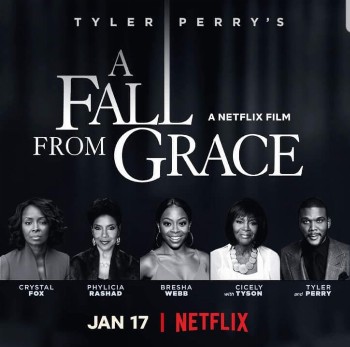 Jasmine was sent to Grace because everyone thought she was not a good lawyer. Jasmine feels something is fishy and asks Grace to share how her relationship was and talk about her marriage. Her friend Sarah pushes her to go to an art gallery opening where she meets Shannon, he flirts and woos her and Grace kinda falls for it. So, when Shannon proposed to her, she said yes but the romance soon died. Sheâ€™s fired from her job by her boss who is very abusive for stealing $300,000 from the account she used to manage. She also finds out that from her bank account $4000 are outdrawn and a mortgage has been done in her name. She finds Shannon having sex with a young woman and realises she has been conned by him. As Shannon reveals his plan, she starts hitting him with a baseball bat and leaves, but when she comes back the body is not there.

Jasmine is convinced that Shannon is not dead but she doesnâ€™t perform well in court resulting in Grace getting convicted for murder. Youâ€™ve got to watch the movie to know how Jasmine saved Grace and how Shannon pulled this off and who helped him with it. 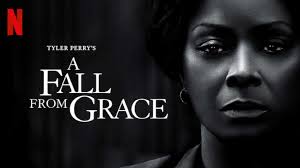 A fall from grace Release Date

A fall from grace Cast

A Fall From Grace is a brand new thriller released on Netflix which is written and directed by Tyler Perry. The opening scene shows a police officer who couldnâ€™t stop an old woman from jumping off the roof and later comes to his wife Jasmine played by Bresha Webb, who is the main lead of the movie. The movie is divided into two timelines: Present-day, where Jasmine who is a defense attorney is seen interviewing her client Grace. Grace is divorced and is charged for the murder of her second and young husband, Shannon.

Grace starts to share about her personal life with Jasmine and we get to know a lot of things about her like her first husband left her seven years ago for his secretary and sheâ€™s been single since then until her friend Sarah pushes her to go to an art gallery opening where she met Shannon, he flirts and woos her and Grace kinda fall for it. They get married and then the problems start.

Jasmine is convinced that Shannon is not dead but she doesnâ€™t perform well in court resulting in Grace getting convicted for murder. While leaving the court she sees Sarah wearing the same necklace as Shannon and she screams to call Jasmine. Jasmine goes to that particular house where she finds several elderly people tied up with chains in the basement and then she is dragged by someone there enters Sarah & and we get to know that he is Sarahâ€™s son. Jasmine's husband realises that Sarah is wanted for Identity theft and goes to her place, when she denies him to enter the house, he calls Jasmine and hears the ringer from inside the house. He runs down and fights both of them, ending up killing Shannon whoâ€™s real name is Maurice. We get to know that Sarah has been conning women for 15 years. Grace is set free, although Sarah escapes.

FAQs about A fall from grace