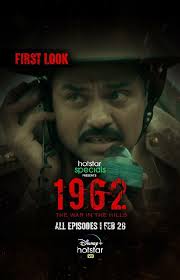 1962: The War in the Hills is a tale that revolves around the war of held between India and China in the year 1962. The story is taken from the real life happenings that had taken place back in November 1962. The story deeply deal with emotions of extraordinary bravery and firmness. The series is based in the theme of military drama. As per the first look, it seems that it points out the Galwan Valley clash. It also relates the way how the 125 Indian soldiers fought 3000 Chinese in 1962.

1962: the war in the hills gave a good start because of the fact that it has shown the personal side of a soldier's life, not just the war and action. How Indian soldiers fought this war with Honor and Courage despite all odds in Campus shoes, even outnumbered, with limited ammunition.

Abhay deol is brilliant as usual. But the series is unnecessarily stretched.However, the story felt a little cringe when they started to focus too much into the love story.

A good storyline is being showcased. Small stories are shown in the tension of war is good enough to hold 10 episodes series going. Main characters have acted well enough. The direction and the VFX effects could have been done much more better. The screenplay could have been more interesting and gripping. Overall, the story is a one time watch.