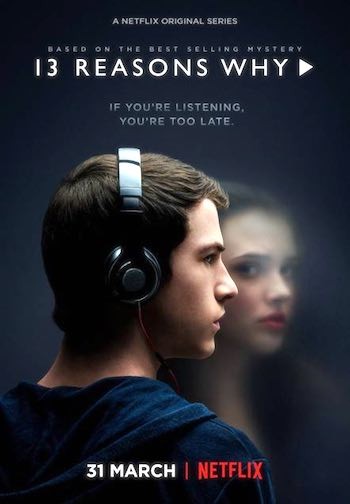 13 Reasons Why is an American teen drama streaming television series. It is based on the 2007 novel Thirteen Reasons Why, by Jay Asher. The series revolves around high school student Clay Jensen and the repercussions of high school student Hannah Baker's suicide. Before her death, she leaves behind a box of cassette tapes in which she details the reasons why she chose to end her life as well as the people she believes are responsible for her death.

An absolutely incredible show, ofcourse it's not meant for people who are suicidal or could be triggered in any way but the warnings clearly explain that, they include crisis resources too. Itâ€™s a beautiful show depicting lives and the way it reflects reality is just amazing by each and every character and their story. It will make you think and ponder about really important stuff. Everyone literally everyone has done such a great job in the series you canâ€™t ask for any more.

The way it makes you feel connected with the characters, itâ€™s amazing. It's great to create awareness on such a topic which society ignores frequently. The show gives a full scope on the challenges being faced by our youth today and there is some comfort in the words they say as they help you navigate through a tough time being had on screen that can be related to yours or anyone else's life off screen. It's an amazing story not to make suicide look cool it is an open up discussion that needs to be discussed that's how the show potrayed it . This will help people understand more. Must watch and highly recommended!!!

FAQs about 13 Reasons Why