The versatile actor, Farhan Akhtar is back with his upcoming film Toofaan. As we all know, Farhan Akhtar is a tremendous artist and an extremely talented human. Maximum of his movies are worth watching. He never fails to impress his fans and viewers. In each of his films, he gives his best and portrays himself in such a way that depicts him as if he is the only one, who can represent the respective role in such perfection.

Toofaan is an upcoming 2021 release Indian Hindi-language film that is based on the theme of sports drama. The film is directed by Rakeysh Omprakash Mehra and it features Farhan Akhtar, who will be seen portraying the role of a national-level boxer, alongside Mrunal Thakur and Paresh Rawal in supporting roles. The shooting got commenced in Dongri on 26 August 2019 and was completed in March 2020. The film will stream on 21 May 2021 on Amazon Prime Video. 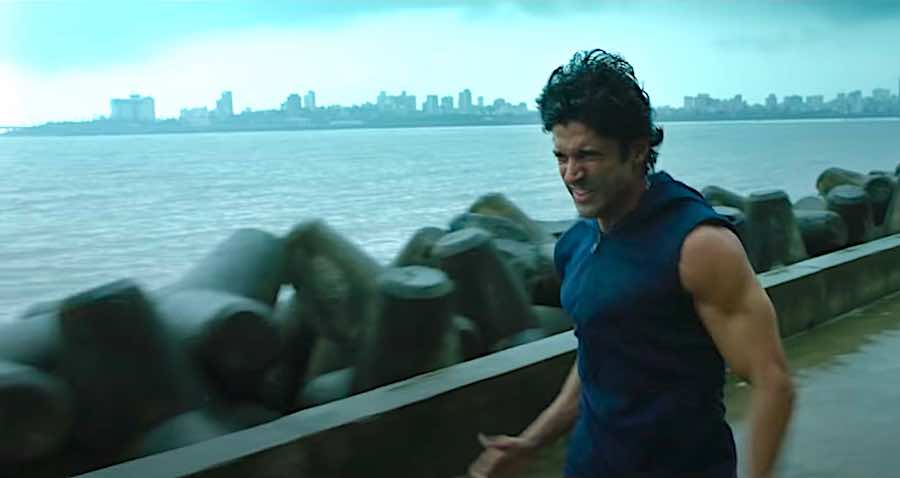 In the film, Farhan will be seen as a national-level boxing player. The film has been shot across Mumbai at real locations like the Dongri slums and the Gateway Of India.

Farhan Akhtar, who was last seen in Priyanka Chopraâ€™s The Sky Is Pink, will be seen as a boxer in Rakeysh Omprakash Mehraâ€™s film. One of the most multitalented actors in Bollywood, Farhan Akhtar is known for selecting films with pieces of uniqueness and some extraordinary content. And keeping that streak intact, in his next â€” Toofan â€” the actor tremendously handled the role of a boxer for which he has prepared hard. Farhan has completely transformed his appearance as a boxer for the Rakeysh Omprakash Mehra film, and the images that he is posting on social media bears testimony to the hard work and dedication that the 45-year-old actor has put in to build the physique.

According to Farhan Akhtarâ€™s perspective, a script should be designed in such a way that it should bound the actor to live the role or the character that he will be portraying. â€œPutting this level of effort is only possible if the story motivates you to give your best. At the end of the day, weâ€™re not making a film to showcase a great physique but to emotionally engage the audience with the journey of the character. To make that experience believable, all efforts are worth it,â€ he says.

Farhan has worked hard to bring the look of a professional boxer. However, he has also marvelously represented the role of another sportsperson, sprinter Milkha Singh in Bhaag Milkha Bhaag (2013). Hence, after seeing such beautiful performances of him, the viewers and his fans are curious enough to know about the way he is preparing himself for his upcoming film Toofaan. â€œRunning and boxing are two extremely different disciplines that bring their own set of challenges,â€ he explains.

The actor always highlights a unique look in each of his films, whether it is Rock On (2008), Luck by Chance (2009), Zindagi Na Milegi Dobara (2011), Dil Dhadakne Do (2015), Lucknow Central (2017), or last yearâ€™s The Sky is Pink. And now even the audience has begun to build some high expectations from him. â€œItâ€™s strange, but as an actor, you want the audience to have expectations from you, and yet one must try and find a way to surprise them. I feel grateful for all the love and support that Iâ€™ve received over the years. It gives me the courage and confidence to follow my heart,â€ he shares.

Going by his filmography, Farhan has clearly managed to maintain a variety. When asked if it is by plan or luck, the actor says, â€œThe kind of stories you are drawn towards are the stories that somehow find their way to you. There is some kind of serendipity in how this happens.â€

Toofan is Farhanâ€™s second collaboration with director Rakeysh Omprakash Mehra after the hit sports biopic, Bhaag Milkha Bhaag (2013). â€œToofan is a story that will move and motivate all of us. Itâ€™s so much fun to collaborate with Farhan yet again. He does not act the part but becomes one. I canâ€™t wait to share the film with the audience,â€ says Mehra.

The two-minute-long teaser starts with Farhan's character falling in the ring after being knocked out by his opponent. After that, in the true Rakeysh Omprakash Mehra style, the teaser shifts to the flashback story of the character wherein we see his transformation from Ajju Bhai to Aziz Ali, the boxer, with the support of Mrunal Thakur's character. The intense sports drama also features Paresh Rawal playing the role of Farhan's coach.

After working with Farhan in Bhaag Milkha Bhaag, I was certain he would be the perfect protagonist for Toofan. The best thing about him is that he does not act the part, but lives it completely," said Rakeysh as reported by news agency ANI. Toofan is a story that will motivate and inspire all of us to get out of our comfort zones and fight towards achieving our dreams. We cannot wait to present our film to viewers across the globe," he added.

Sharing the excitement for the upcoming project, Ritesh said, "At Excel Entertainment, we always try to tell stories that touch the heart and soul of the audience. We consistently strive to develop new concepts which can entertain and enlighten the viewers. With Toofaan, we are presenting an inspirational sports drama that presents the story of a goon from the streets of Dongri set against the backdrop of boxing, his fall, and triumphant comeback against all odds in life." The producer added, "Excel Entertainment in association with ROMP Pictures is very thrilled to announce this special film. Our long-standing partnership with Amazon Prime Video has been brilliant and Toofaan is yet another exciting chapter and association for us at a global level."

Apart from acting in and producing 'Toofan', Farhan is also subsidizing the movie 'Sharmaji Namkeen'. The film was stopped due to the unfortunate passing of actor Rishi Kapoor. As per the reports, Paresh Rawal would replace the role of the late actor in the film.

Previous ArticleChehre: Emraan Hashmi and Amitabh Bachchan will share screen for this mystery thrillerNext Article30 best Netflix shows and series that you will enjoy watching 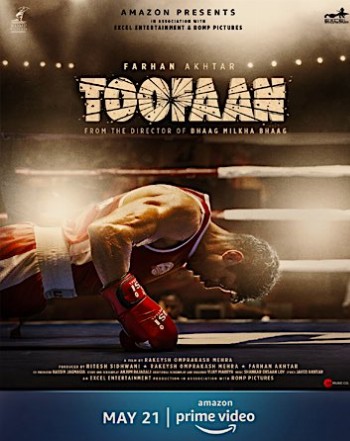