Sunflower is a Zee5 original web series releasing on 11 June 2021. The show stars Sunil Grover, Ranveer Shorey, Girish Kulkarni, Ashish Vidyarthi, and Mukuk Chaddha with some other talented actors. The series is directed by talented director Vikas Bahl. The show will be available on the Zee5 streaming platform worldwide on June 11, and its trailer dropped on the Zee Youtube channel on May 28, 2021. The trailers have made fans excited because of the powerful cast, amazing story, and great direction of Vikas Bahl. The fans have commented mostly on Sunil Grover's comeback on the digital platform after Tandav and waiting to see his acting in sunflower as a main lead of the show.

The trailer of the show takes us to the sunflower society where the police have arrived because a death happened in flat 1001, and later on, police found out it is murder, Sunil Grover becomes the prime suspect of the murder because of his weird talking and expression. Ranveer Shorey plays the role of the inspector who is investigating this murder mystery with his assistant. There are many people in the police eyes as the suspect of the murder and they investigate all of them one by one And ask all of them not to live in the city or country. But in all these mystery one person who canâ€™t get off from the mind of the police is Sunil Grover because of his way of acting.

In the trailer we Sunil Grover with a very crazy character, He portrays a middle-class man who regularly goes to work, do his work with dedication, talks politely to everyone and happy human but we can also there is some dept and dark layer in his character, which maybe look like a psychopath who is different in front of people, one cannot talk what is going in his mind, he is seen doing some weird stuff with injection, dressing up weirdly and running off from the places, which make us more suspicious about him being the murderer in the show. People addressed him as an idiot and stupid person, but his character has a mysterious layer to it which defiantly be the surprise element for the viewers, As per the trailer we can say that Sunil Grover is going to stand put with his brilliant performance in the series.

Sunflower is a dark murder mystery a show with various levels of suspense and emotions, The other character who stands out apart from Sunil Grover in the show was Ranveer Shorey who a police inspector investigating the murder mystery of apartment 1001 in sunflower society, He comes across various suspects in the show like Sunil Grover, maid, watchman and more but in one of the seen in the trailer we can see him saying that police has been made a fool, So it could mean that he was completely wrong in investigating and targeting the wrong people and failed in his work, or somehow at the end, he finds the

murder and fulfilled his duty, In the trailer, we can see him in the role of an honest policeman and wants to find out the truth behind the murder.

The storyline and plot twist will be the winning strike in the show because of its commendable story and plot, Also icing on the cake were brilliant actors giving the true natural performance and amazing direction by Vikas Bahl. The freshness and rawness in the show are expected by the audience. There has been a lot of buzz about the show from its teaser drop and trailer drops it is more awaiting, We are eagerly waiting for Sunflower. 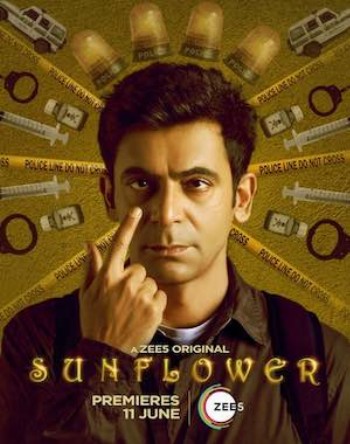