Amazon Prime's new movie Sherni Star Vidhya Balan in the role of an inspector who is hunting down the hostile activates in the forest, The trailer dropped on the Amazon Prime Youtube channel on June 2, 2021. The movie will release on 18 June 2021 on the Amazon Prime streaming platform. The movie is directed by Amit Musurkar and produced by Bhushan Kumar, Krishan Kumar, Vikram Malhotra, and Amit Masurkar. The screenplay of the movie is done by Aastha Tiku, Moreover, there are other talented actors alongside Vidhya Balan are Vijay Raaz, Neeraj Kabi, Ila Arun, Sharat Saxena, Brijendra Kala, and others.

The trailer shows the small village who are harassed by the activities happening in the jungle near their village where there are murders taking place of the people who are wandering in the jungle for any reason, and the villagers are suspicious it is done by a wild tiger in the forest. To solve this issue villagers complain, and demand a proper solution. A female inspector arrives in the village for their help but none of the people are happy to see a women officer, because they find it useless to the villagers and other officers also.

In the trailer, we can they the makers are trying to give us the message that humans, animals, and the environment can co-exist together peacefully. By the dialogues, like the forest and villagers are dependent on each other we must do something to save both of them. The character of Vidhya Balan fights against the other designated officers and villagers to solve the problem for both the animals, forest, and villagers, wanting to help them all she faces some major issues in her work and personal life as well. The cast of the movie has been brilliantly acted out in the movie.

Coming up with such a sensitive topic is a commendable job by the makers where they try to educate people about humans lives dependency on natural forest resources and animals are also somehow depends on human and can also threaten the human so it is important to keep out the balance in nature, All these factors are going to be explained by the character of Vidhya Balan. The movie is about a strong female fight with humans and wild animals, Human is her personal life thinking of women as a weaker gender and animals for the safety of villagers life and forest.

Sherni will make its worldwide digital premiere on Amazon Prime on June 18, 2021. Its will great to see the fresh and sensitive topic in the movies acted and directed by tremendous talented peoples. The hope has been high for the Sherni.

Tags
Previous ArticleSunil Grover on its way with a mystery sunflowerNext ArticleHero Mode: A 30 days coding make you Hero 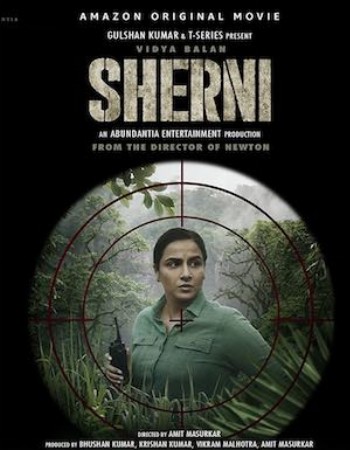