Afterâ€™ Roohiâ€™ and â€˜Mumbai Saga yet another movie. â€™Sandeep Aur Pinky Faraarâ€™ is set to be released on the big screen. And seems like the days of watching cinema on the big screen are going to make a comeback again. Sandeep Aur Pinky Faraar is a 2021 road film Directed, produced, and co-written by Dibakar Banerjee along with the co-writer, Varun Grover who is known for his write-up for movies like Masan. Both Arjun Kapoor and Parineeti Chopra started their film journey together with the movie â€Ishaqzaadeâ€, both were welcomed with open arms and the movie turned out to become a super blockbuster. And after 9 years both of them are coming together once again. The theatrical release of the movie was held back for more than two years and finally has been released. The initial 15 minutes will give you high hopes that itâ€™s going to be a great thriller and thereâ€™s gonna be suspense and storytelling but it doesnâ€™t fulfill your expectations and the scenes are very repetitive. The twists and turns are so boring and this is the third time we see these two actors collaborating after Ishaqzaade and Namaste England. Namaste England turned out to be a flop movie and Sandeep and Pinky Faraar also turned into a flop as their chemistry is so weak in this movie.

The movie talks about two people from different professions and different backgrounds, who by fate are bound together in a rough situation. Pinky (Arjun Kapoor) a Haryanvi cop whereas Sandip Walia (Parineeti Chopra) is a Banker in a corporate bank. The movie begins with the kidnapping of Sandeep Walia by pinky. Pinky was assigned to kidnap Sandeep in a fraud case by Jaideep. They are running for their life and thatâ€™s what the whole movie is about.

Parineeti Chopra plays the role of Sandeep Wali who is a successful Banker at Parivartan Bank, also known as Sandy. She is trying to run away from her boss who is trying to catch her. For some reason, sheâ€™s trying to escape. She was in a relationship with her boss and gets pregnant with his child, she refuses to get an abortion that is when he hires an officer to erase her trace. The officer orders a suspended cop, Satinder Dahiya played by Arjun Kapoor also known as Pinky. But Pinky gets to know that Tyagiâ€™s plan is a bit different, he is planning to kill both of them so he decides to run away with Sandeep. They meet in a weird situation where Sandy is trying to escape an attempted murder thatâ€™s when Pinky feels something is fishy and needs to get rid of this problem. Sandeep asks Pinky to take her to Nepal for which she offers him 10 Lakh rupees and he agrees. They are set out on a journey to leave India illegally by getting fake passports. They plan to reach a hideout near Indo - Nepal border. They reach Pithoragarh in Uttrakhand from where they plan to cross the border. There they meet an elderly couple, where Sandeep tells them that the room in their hotel is very dirty and that she is pregnant and wants to stay in a safe space, to which they agree and let them stay with them. The little suspense that is there in the movie occurs just before the interval to keep you waiting for the second half. Although, the movie is so damn slow that you might just fall asleep in the middle of the movie. Both of them hate each other initially but on the journey gate for romance opens up for them. In the second half of the movie, enter other amazing actors like Pankaj Tripathi playing the role of Kartaar Singh, Jaideep Ahlawat as Ponga Asti, and Neena Gupta. The movie shows some comic scenes from above but is a dark reality of the divided classes. The director Banerjee is trying to showcase what happens when two people from different backgrounds and classes are tied together in complex situations where there are chances to die. 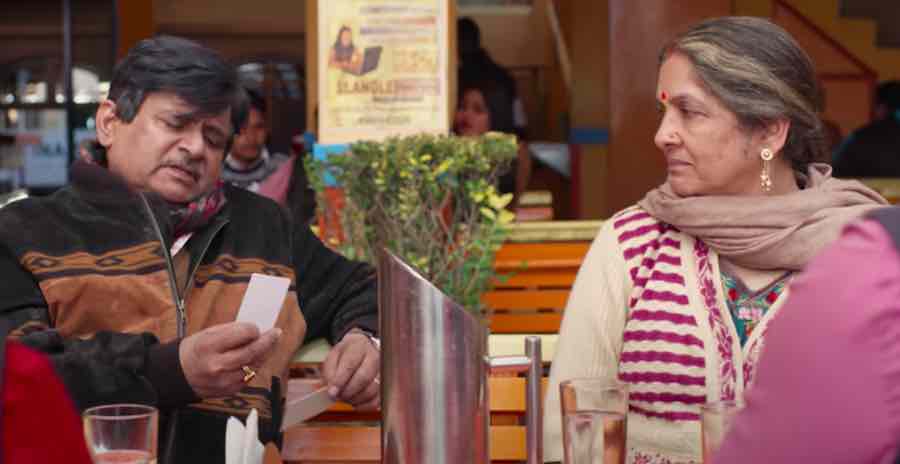 When looking at the performance, Parineeti Chopraâ€™s acting definitely was mainly amazing and did stand out. Overall, she gave a decent performance and perfectly did justice to her layered character. She did a great job in The girl on the train and she has given her 100% here as well. Her character is very bold, strong-headed, independent while Arjun Kapoor is not in a good shape including his physical appearance as well as acting skills as the movie was shot four years ago. His Haryanvi accent is pretty alright but he needs to work a lot on his acting.

The movie has a song by Anu Malik which youâ€™ll hear in a scene where thereâ€™s marriage and Arjun Kapoor dances on the track called Faraar where the dance is nowhere close to good. The script is average and there is nothing fresh.

Anil Mehta has done an amazing job with cinematography and weâ€™ll give him a 10/10 for that mainly for the Indo - Nepal border scene. In a particular scene, where we see Neena Gupta and Parineeti Chopraâ€™s character meet for the very first time and we see Sandy feel overwhelmed and she starts crying, breaks down, and hugs Neena whoâ€™s a stranger to her whom she just met. The scene is beautifully written and performed. The movie is a little slow but is a one-time watch.

Previous ArticleZack Snyder's Justice League: DC Superheros are back to spark big screen once againNext ArticleBlack Widow: Finally releasing on 9th July in theatres and on Disney+
Download Joyadda Mobile App
Get latest updates for web series/movies released on OTT platforms like Netflix, Hotstar, Zee5, SonyLiv and the launching for any new games