The trailer of the Roohi movie is out now and we can assure you that the movie is going to be so spooky and funny at the same time. Itâ€™s a horror-comedy movie which is directed by Hardik Mehta and produced by Dinesh Vijay with the production house Maddock films. Roohi is going to be released on 11th March 2021. Janhvi Kapoor is playing a role of a girl who is possessed by a witch. We see Rajkummar Rao, Varun Sharma, and Jahnvi Kapoor in the trailer and itâ€™s definitely going to be scary.

The trailer looks promising and it will have the same concept and follow around the same story in the movie Stree, a film in 2018 which starred Rajkummar Rao and Shraddha Kapoor which also was a comedy-horror movie. The movie was earlier titled Rooh Afza which later changed to Roohi Afzana and then finally now itâ€™s named Roohi. Rajkummar Rao shared the trailer on Twitter with the caption â€˜Watch the #RoohiTrailer at your own risk Kyunki Iss Baar Mard Ko Jyada Dard Hoga!â€™ A few hours later, Rajkummar Rao, Varun Sharma, and Jahnvi Kapoor shared the new poster of the film, Roohi. Janhvi shared the teaser writing â€œ Iss Bhootiya Shaadi Mein Aapka Swagat hai #MagicOfCinemaReturns; movie releases March 11. 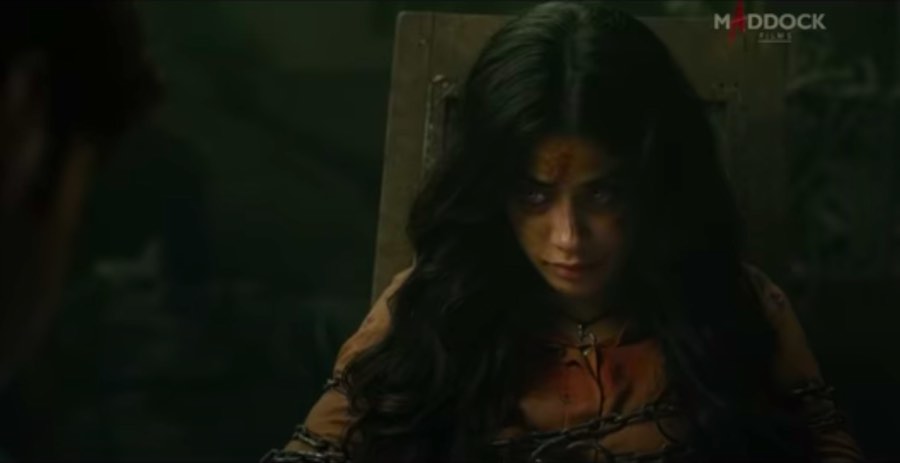 Janhvi Kapoor is a girl who is possessed by a witch and abducts brides on their honeymoon and Rajkummar Rao and Varun Sharma are two small-town boys who take up the responsibility of saving the brides and keeping them secured. But while doing that, both of them get lost in the forest with Roohi, the character played by Jahnvi Kapoor. The trailer of the Roohi film got 14 Million+ views on Youtube in a day. The movie will take you to a Spooky Wedding of the trio. Several other Bollywood Personalities like Shradha Kapoor, Ayushmanan Khuranna, Kriti Sanon, Bhumi Pednekar, Varun Dhawan, and many others also shared the poster and love for the film. The stunning performance by the three stars and the spooky effects to make it look scary will make you laugh. We are all very excited to see how this one turns out.

Watch Trailer
Previous ArticleMost awaited Amazon Prime Show The Family Man Season 2 is postponed to summerNext ArticleIndian 2: What do we know about this upcoming movie of Kamal Hassan
Download Joyadda Mobile App
Get latest updates for web series/movies released on OTT platforms like Netflix, Hotstar, Zee5, SonyLiv and the launching for any new games