Pagglait is a Hindi language, Dark comedy-drama movie released in 2021. The movie is written and directed by Umesh Bist. The movie is produced by Shobha Kapoor, Ekta Kapoor, Guneet Monga, and Achin Jain under the banners of Balaji Motion Pictures and Sikhya Entertainment featuring an amazing cast including Sanya Malhotra, Shruti Sharma, Raghubir Yadav, and Ashutosh Rana who played lead roles. The soundtrack of the movie is composed by the singer who has a lovely voice, Arijit Singh. This was the first time where he has tried composing, itâ€™s his first venture.

After delivering two hits back-to-back on OTT platforms, Shakuntala Devi and Ludo, Sanya Malhotra is here to make her hattrick with another Netflix film, Pagglait. The movie throws out too many surprises from one box. The initial play might be stereotypical for Bollywood lovers but it gets wonderful and overwhelming as you deep dive into it. It released on 26 March 2021 on Netflix, the movie talks about our Indian society where we visualize women incomplete without a man. So we expect that a woman should get married and take care of their family and kids, once she becomes an adult. Therefore, when Sandhya (Sanya Malhotra) rejected the idea of getting married again after the death of his first husband, everyone thought she was crazy (Ye to Pagglait hai) this sentence was repeated multiple times in the movie. The film is being highly praised for its story, performances, and theme.

A few months into her marriage, Sandhya, a strong yet silent woman married in a middle-class family received the news of the sudden death of her husband. But surprisingly, Sandhya was not at all shocked or hurt by the news. She was behaving normally which came as a shock to her family. Because traditionally, Sandhya is supposed to be shattered, sob and mourn for her husbandâ€™s death, but she chooses not to. And when her friend came to mourn for her husband's death, Sandhya told her about her feelings and told her that she did not feel sad about her husband's death as she felt when she lost her cat when she was small. In fact, she is enjoying the freedom now. When the family realizes that her late husband had insurance worth fifty lakhs with Sandhya as its sole nominee, the family wants her to make â€˜smartâ€™ decisions. Her in-laws want to get her married again in the family so that the insurance money remains in the family. But now Sandhya wants her destiny into her own hands before somebody else does it for her.

The characters surrounding her have been displayed memorable by some of the best character actors in the industry. It was a delight to see Raghubir Yadav in two remarkable roles within a fortnight, last week in the theatrical release Sandeep Aur Pinky Faraar and now in Pagglait as a dominating Taraji. Sheeba Chadha and Ashutosh Rana are exquisite as Sandhyaâ€™s heart-broken, morally conflicted in-laws. After movies like Dangal, Badhai ho, Photograph, Sanya Malhotra has surprised us again with her impeccable performance as the young confused widow. It's been quite some time that we have been presented with some good woman-centric movies like Queen, Kahaani, English Vinglish, Pink, etc with strong characters and a strong message to society. And It's high time that society has to change its perception towards women now. The movie definitely makes you think that there are a lot of things to achieve in life apart from marriage and a woman does not always need a man to make her feel happy. The movie is brilliant and the way she is so soft-spoken and sweet, that doesn't change with her understanding as she tries to discover herself. It's a really nice movie overall.

Pagglait is a motivational and relatable movie, which would have motivated every girl who has watched this, not only girls but to everyone who is afraid to break the laws that society has imbibed on them. You see how women are suppressed and how they easily give up things for the sake of the person close to them and the importance of finding and loving yourself. Each and every person should explore the outside world to get exposed to a lot of new things.

I do believe that this is an amazing script, which is about self-discovery could have been executed more efficiently as the movie's pace was pretty slow and people would've enjoyed it more if it was fast-paced. But Sanya Malhotra for sure has proved to be one of the best actresses in Hindi Cinema. The movie portrays how women are usually suppressed and how they easily give up things just for the sake of the person they love. She didnâ€™t underestimate herself and ran away to live life on her own terms, feeling the freedom. Another plus point of this film was that it put female characters into light and they got a chance to prove themselves in films and it showed a very different character, who's not a damsel in distress or a blunt girl. She is just a sweet, simple girl. Brilliant concept and acting! Possibly one of the best films on women empowerment according to me. The movie is fresh in its genre and thoroughly enjoyable. There are sad, sweet and funny turns but itâ€™s a special film about a woman about redefining her happily ever after.

Tags
Previous ArticleWho Killed Sara â€“ Plot, review and other details of this Netflix showNext ArticleStowaway - A Netflix movie based on the journey to Mars 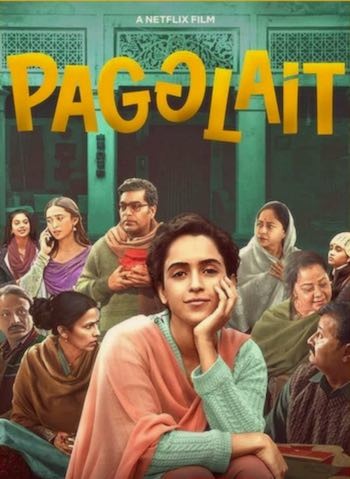