Outer Banks Season 1 left us on a major cliffhanger. It was released on Netflix on April 15, 2020. Netflix renewed Outer Banks for a second season after two months in July 2020, Netflix confirmed that it is official that another season is coming. Outer Banks is an Action-adventure Mystery about a group of teens in the outer banks of North Carolina, who are called â€œPoguesâ€. John B, one of their friends wants to find out what happened to his missing father and on their journey, they discover a treasure that is tied up with John Bâ€™s father.

It is expected that the coming season will pick up from where they left off. Weâ€™ll see John B and Sarah in the Bahamas trying to get the gold back. Kie, JJ, and Pope will try to find a way to deal with the SBI escape and their supposed deaths. The last episode revealed that John Band Sarah survived the high tide. Netflix started filming for season 2 on August 31 2020 and if everything works out well without any delay then Outer Banks season 2 will premiere by June 2021. Fans have a lot of questions about the ending that needs to be answered. Whatâ€™s going to happen next with John and Sarah? Will their friends come to know that they are alive? Will they be able to get the gold? We believe weâ€™ll get all the answers in the coming season and the audience canâ€™t wait to see what happens next!

The series begins with an early-season hurricane on the East Coast of North Carolina which puts John B, JJ, pope, and Kiara into adventure and danger when they find a mysterious sunken wreck. John B convinces others somehow that this is related to his missing father. They are â€œPoguesâ€ a group of four friends - the ringleader John B (Chase Stokes), Kiara (Madison Bailey), Pope (Jonathan Daviss), and JJ (Rudy Pankow). And then there are their rivals called Kooks. If the Pogues are the scrappy kids then the Kooks are the people belonging to the upper caste. Sarah Cameron (Madelyn Cline) is the queen of Kooks. 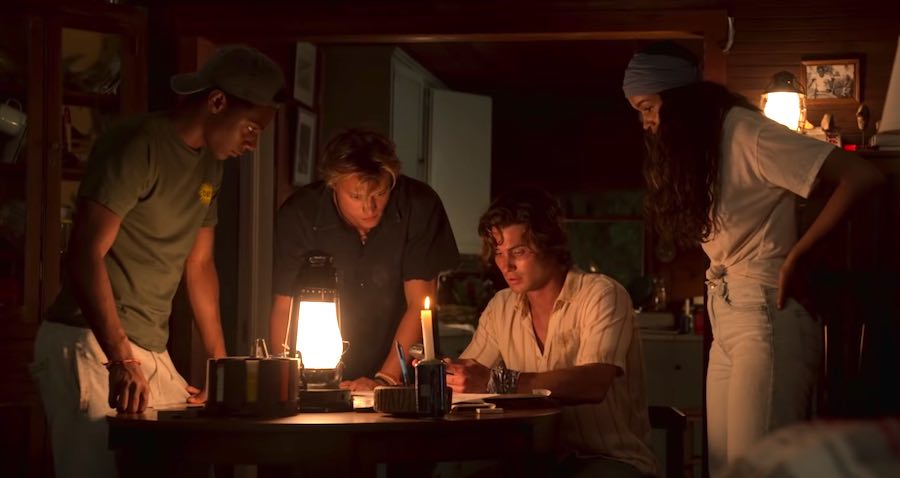 John B and his friends start finding clues related to his dad's disappearance, that lead them to the Royal Merchant and its life-changing bounty. JJ and John B go to Lanaâ€™s house to find out more about the compass that belonged to her husband Scooter. But they see two men yelling at her, and as soon as they left, they showed her the compass and she said that it's too dangerous and asked them to leave. John B works for Sarahâ€™s dad where he takes Scuba gear and they plan to get into the bottom of the deep-sea mystery. Kiara and John B go to the Redfield lighthouse to find a clue where a man tells them where the Merchant Sank. Kiara finds an envelope that contains the map where the Royal Merchant wreck and a tape recorder of John Bâ€™s father talking about it.

The pogues explore the wreck but couldnâ€™t find the gold there. While returning home a sheriff is waiting for John B and somehow he manages to escape and on his way, he finds Sarah, who helps him and takes him to her house where she tells him about Tanny Denmark who built the house. Sarah and John B go to Chapel Hill together. They both feel a connection when they spend time together there and have a good time together.

John B thinks he has found a way to reach the gold but wants to include Sarah in the search but the pogues donâ€™t trust her and they argue about it. He tries to get them along while ward who is Sarahâ€™s father offers to help John B find the gold but as he refuses he attacks him which you later release is not the first person in the family to be attacked by Wars it

The Pogues and Sarah found the gold but somehow Ward found out about it and sent the plane carrying gold to the Bahamas while he fired the sheriff and blamed it on John. As he runs from the police, his friends try to protect him. They try to distract them so that John and Sarah can get away. Sarah now needs to pick aside. The Pogues steal JJâ€™s fatherâ€™s boat, Phantom. John and Sarah took the Phantom and tried leaving till the case gets cold but they end up in the middle of the storm and john reveals what Ward did on the radio and got him arrested but their boat turn upside down and they are assumed to be dead and their friends mourn while John and Sarah get rescued by a passing ship, they realize they can still get the gold and are on their way to Nassau in the Bahamas. The mystery is unfolded beautifully with a lot of side stories happening with each character and the suspense will make you binge-watch it. The audience is waiting for season 2 to release to know what will happen.

Watch Trailer
Previous ArticleRadhe: Your most wanted Bhai will be releasing in theatres on Eid 2021 - know everything about itNext ArticleOne Night in Miami is streaming on Amazon Prime: What you need to know
Download Joyadda Mobile App
Get latest updates for web series/movies released on OTT platforms like Netflix, Hotstar, Zee5, SonyLiv and the launching for any new games