Bugs Bhargava Khannaâ€™s Nail Polish, is a story that revolves around a courtroom drama focused around the death of migrant children, who have been brutally murdered by Veer Singh aka Manav Kaul. However in the midway through the trial, conditions turn out to get twisted that eventually causes Veerâ€™s lawyer, Siddharth Jaisingh aka Arjun Rampal, the agent Amit Kumar aka Anand Tiwari and Judge Bhushan aka Rajit Kapur to look around for any substitute approaches in order to handle the case. Everything from the acting to the direction, editing, and cinematography work fine enough to keep you hooked . However, itâ€™s the twist, its implications, and its conclusion that ruins the viewing experience.

The story of the movie is so nicely presented that you can't take a moment out of it. Manav Kaul is too good .. Arjun Rampal and Rajit Kapoor's support are highly commendable. Content related to legal genre dramas is a tough thing to come across. But luckily, Bugs Bhargava Krishna has conquered successfully. He has done a great job in making the journey of the film. The movie doesnâ€™t contain any unnecessary scenes. Each and every shot are extremely authentic and unavoidable. The story will drive you straight towards the witnesses and proofs. All the credit goes to the screenplay which is extremely curious enough. Both parts of the stories are beautifully connected that will force you to predict and frame the ending. The background score is commendable. The story of Nail Polish is based on true events and happenings.

Manav Kaulâ€™s character is highly appreciated by the viewers. His role contained multiple personalities as in one hand he is a pacifist and on the other hand he gets way to intrusive and attacks the fellow prisoner. Overall, by choosing this kind of role he proved his versatility.

Apart from him, other characters also have done a great job. Arjun Rampal seems that he is a perfect fit for his respective role; lawyer. Sid Jaisingh having some negative motives defeat Veer. The way he has portrayed himself is way too impressive. Rajit Kapur as Judge Kishore Bhushan gives a striking performance and his relationship with his on-screen wife Shobha played by Madhoo Shah is quite beautiful.

According to the viewers and the critics, Nail Polish will definitely prove to be a great watch especially for those who are thriller lovers. 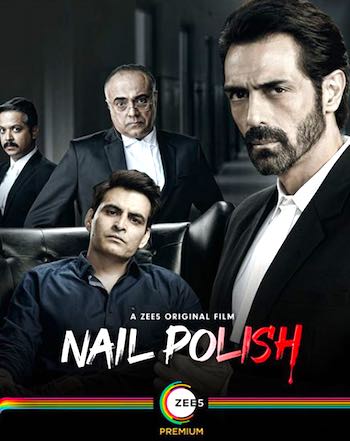