Mumbai Saga is an upcoming 2021 Indian movie based on the genre of action-crime. Directed by Sanjay Gupta and produced under the banner of T-Series, the movie features John Abraham, Emraan Hashmi, Suniel Shetty, Kajal Aggarwal, Rohit Roy, Anjana Sukhani, Mahesh Manjrekar, Prateik Babbar, Samir Soni, Amole Gupte, and Gulshan Grover. The story of Mumbai Saga is based on the era of the â€™80s and â€™90s, portraying changing scenarios of Mumbai and the people residing thereby shutting mills in order to construct high buildings and raise malls.

The story of Mumbai Saga is based on a true story that depicts that how Bombay became Mumbai. Here, John Abraham portrays the role of a deadly gangster, named Amartya Rao, who wants to rule the Bombay underworld in the â€™80s and â€™90s, the time before the city came to be known as Mumbai. Emraan Hashmi will be representing the role of a cop, who is deeply involved and determined to clash Amartyaâ€™s reign and to make the city free from violence.

Mumbai Saga marks John Abraham and Emraan Hashmi's first project together. The film was earlier scheduled to release in June last year but its shooting schedule got postponed due to the coronavirus outbreak, which leads to the nation-wide lockdown.

Emraan Hashmi previously said in a statement, â€œAn encounter specialist, he can put a bullet into someone if it accomplishes his motive. He is a badass character in a dog-eat-dog kind of world wherein this guy is the wolf. No one would imagine that I am playing a cop, but for this policeman, he is, as I said, like a gangster. Be it by fair or unfair means, he will bring down the guy he is going for. So, itâ€™s kind of home turf, but itâ€™s a very entertaining pitch for a character in a pure Sanjay Gupta style, who has created his own brand of cinema. And as an actor, I am always up for doing something different.â€ 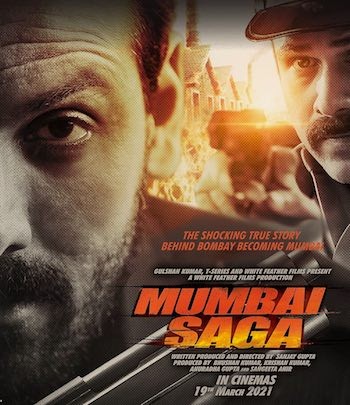