Sony Liv the famous streaming platform has now come up with an exciting, and realistic political drama called â€œ Maharaniâ€. The show is about a married woman you donâ€™t know anything about politics after the death of her politician husband she took her place and leads the party which she doesnâ€™t have any knowledge about it. The events took a turn after she became the leader and the way she faces them all is commendable, the story revolves around the character of Rani Bhatti played by Huma Qureshi, who has done a tremendous job in the series.

The series is based on the political drama of Bihar state where the politics is no less than war zone and Bhima the CM of the state has numerous enemies but mostly to count three big enemies are after his life and one of them get succeed but Bhimaâ€™s strategies donâ€™t allow them to take over his seat instead of others, his wife Rani Bhatti approached by Bhima to become new CM, Rani doesnâ€™t have any knowledge of politics and politicians, It is refreshing and motivating to see her in this role of CM.

Huma Qureshi is shown in a raw and natural character, Who is embedded in family drama and politics of the caste system. The series is about how politics can be dirty and nasty where they can take the lives of others loved ones just to win their place, The show has amazing casting, direction, story writing, screenplay, and dialogues there is a very rare chance to cut out on any negative point in this 10 episodes series, the series is perfectly knitted in every aspect a viewer can accept, the series has shown more than expected to the audience.

Maharani is cast with some brilliant actors like Huma Qureshi, Sohum Shah, Amit Sial, Kani Kusruti, and Inaamulhaq. Directed by Karan Sharma and co-produced by Naren Kumar and Dimple Kharbandaand created by Subhash Kapoor. The show is filled with all the talented actors and writers who show as the 90â€™s Bihar with a great realistic touch that one cannot question. The story and plot beautifully merge with subplots without dragging the scenes, the actors have worked brilliantly portraying the characters which you almost feel itâ€™s real-life characters seen in society and the direction of the movie is tremendous.

The Series was premiered on Sony Liv on 28 May 2021, the series of 10 episodes are enjoyable and keep the viewers hooked till the end where the climax has been shown very speedily in one of the episodes where other than that there is nothing to complain about the series, The audience has been appreciating the series all over the internet and the show has achieved the great ranking, Coming up with something simple yet realistic, and impactful is very

rare but undoubtedly Maharani has achieved. The show is highly recommended to watch it is available on the Sony Liv app. 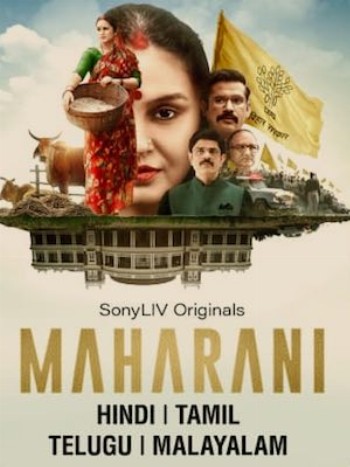