Dwayne Johnson and Emily Blunt star in a new adventurous movie Jungle Cruise of Disney Hotstar. The Disney Hotstar dropped the two-minute trailer of the movie which is full of adventure and action. This movie will be fun and exciting to watch where the whole jungle experience will come on screen and premiered on Disney Hotstar. The production budget is very high and viewers are expected to be seeing amazing action and real-life jungle experience on the screen, Due to the Covid pandemic the movie will not be seen in theatre but on the digital platforms but still it is expected to be the high grossing movie of the year. The movie has very amazing factors in the storyline like natural dangers, Healing remedies, and a possessed tree all these things will be faced by the main characters Dwayne Johnson and Emily Blunt.

The movie showcase the journey of Dwayne Johnson as Riverboat Captain Frank wolf and Emily Blunt as Dr. Lily Houghton where they go through the Amazon forest and face some deadly dangerous natural calamities which will be definitely action pack and thrilling. The movie is based on a Disney theme park ride and will be releasing on 28 July worldwide. The movie has been made over the storyline of 20th century American and Nazis angle, there is action and adventurous scenes in the whole movie. The movie has been shot on a big set with high-cost production to give the amazing real-life scenario and effect in the movie.

At first, the movie was supposed to be released in 2019 but due to the Covid pandemic, it kept delaying and finally after the wait of over one year it will be released in July 2021 on Disney Hotstar and other platforms. The vibe of the movie is larger than life a Disney movie and fans also claim that the movie is giving Pirates of the Caribbean vibe with the look. In the Trailer, we can see some scenes such as the Healing Tree and the waterfall has been shoot beautifully and giving another world or another land vibe to it. The mesmerizing visuals and powerful action is the biggest achievement made by the makers of the movie. There are great expectations from the CGI and Art department of the movie because it seems very promising in the trailer of the movie Jungle Cruise.

With Actors like Dwayne Johnson and Emily Blunt alongside others, actors like Edgar Ramirez, Jack Whitehall, Jesse Plemons, and Paul Giamatti viewers are expecting some amazing performances. The movie story is written by Glenn Ficarra & John Requa and Michael Green. And the screenplay of the movie is done by Ficarra & Requa penning. The movie is directed by great talented writer Jaume Collet â€“ Serra, With such powerful team fans, are thrilled and excited to watch the movie and had been waiting from 2019 for this film to be

released since it was announced way too back and now their wish coming true in July 2021.

The actor Dwyane Johnson has taken to Twitter to share the trailer and excitement for the movie release, After that fans completely drooling over the movie release and it is expected by the critics and viewers that the movie will live up to audience expectations, To see that you can watch a movie on Disney Hotstar premiering on 28 July 2021. 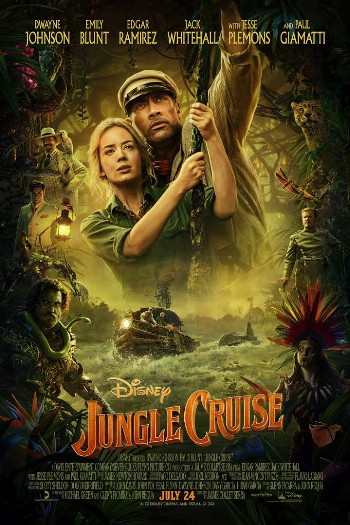