The teaser of the Haseen Dillruba movie dropped on 7th June 2021. In the teaser there 3 shades shown of the three main characters, Taapsee Pannu, Vikrant Massey, and Harshvardhan Rane as Lust, Obsession, and Deceit. The three characters have individual traits in their character of Lust, Obsession, and Deceit in their life. The characters are shown the role they have never been before, especially Taapsee Pannu character is very much highlighted by the makers, they have said the female lead has never done a role like this before, and for her fans, it will be a treat to see her in this sort of character. Both male leads are seen to be back with their powerful performance in this new mystery thriller movie. Vikrant has done a murder mystery series before but to be part of this movie and new kind of role make his fan more exciting for him and his fans.

Haseen Dillruba movie was shot during the pandemic with all the guidelines following, the movie shooting face some issues due to pandemic guidelines but in the end, the directors and actors did a commendable job and the makers of the movie are satisfied with their work and hope fans will also be satisfied by the work after watching the movie. Haseen Dillruba has thrilled and mystery as a full-time genre of the movie there have been many speculations of the story in the movie, it will be love interest between the three main leads but none of this has been confirmed.

In the teaser, Netflix drops the storyline that a wife is suspected under the investigation of her husbandâ€™s murder, and in that process, there is revealing about their thorny marriage and reveals all the truth about their personal life. The movie has a scene of Offbeat, Intimate, and Dark Romance said by Netflix. One word to define this mixture of genres can be called a psychological thriller. The film is 2h 15 min long, the whole story of three characters, the murder, the truth about the marriage and solving of the murder mystery all these thrilling questions will be answered in the movie.â€¯

After Haseen Dillruba movie teaser, fans are waiting for the trailer, and movie to be released soon. It will great to see some talented stars like Taapsee Pannu, Vikrant Massey, and Harshvardhan Rane together in the movie with being in obsessive characters, and psychologically thrilled put together in characters acted out by them. Overall when great directors, producers, company and actors come together for such an amazing murder mystery thrilling film on an OTT platform like Netflix, The expectations are high and anticipated for the film. 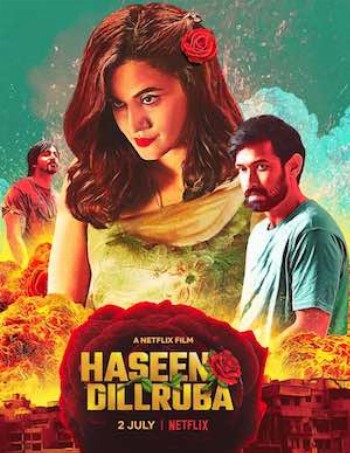