Bhoot police an upcoming Hindi horror film to make its entry on September 10, 2021. The movie is directed by Pavan Kripalani, produced by Ramesh Taurani, and Akshai Puri. The film stars Saif Ali Khan, Arjun Kapoor, Jacqueline Fernandez, Yami Gautam, and Javed Jeffery. The movie is produced by companies like Tips industries and 12 Street entertainment. The movie will be premiered on Disney Hotstar + platform on September 10, 2021. In December 2020 the actors of the movie and makers have shared the poster of this horror-comedy movie. And now it is one of the highly anticipated movies.

The fans are waiting for the movie now because of its powerful and funny star cast to make an extraordinary laughter riot for the audience. The makers, and especially the writers assured that fans will see the witty sense of humor of their favorite actors. The movie is shooted in various locations of India like Dharmshala, Dalhousie, Palampur, and Mumbai. 80% of the movie wrapped up in terms of outdoor shooting during the end of 2020, and the remaining indoor shooting was scheduled in Mumbai as per director Pavan Kripalani's statement.

The making of the movie has been a long process for the actors and directors due to covid 19 ongoing pandemic, the movie was supposed to shoot and release earlier but due to the pandemic there has been a delayed in the shooting of the movie and releasing of the movie. But now the final date is announced of the movie releases is September 10, 2020. Many fans are still anticipating the teaser, and trailer of the film. There is also a wait for the songs of the movie because of its association with the company like Tips industries.

Fans also have great expectations from the cast of the movie the renowned actors, and actresses are part of the movie. All the actors have played a character in a comedy movie but horror-comedy is the genre is not tried but any actors, so it will fun to watch for the viewers and quite challenging for the actors to perform in the movie. The great actors like Javed Jaffrey who is known for his comic timing are also part of the movie, and he accepts the great comic scene from his acting. The writers play a crucial role in such movies where the genre is the king of the movie.

All the actors took to Twitter to share the poster and release date announcement of the movie writing comments like. â€œ We are excited to bring this spooky adventures comedyâ€ on which actors like Yami Gautam commented, â€œ Letâ€™s kill it guysâ€. The shooting of the movie has been done by marking the covid guidelines, they were seen off from one place to another in a there private chattered plan. There were some photos of the actors posted online in which they were seen posing in front of the plane, while they were off to shoot in Himachal.

The script of the movie has gone through some changes over the period as the addition of the new actors every time. The director said he is happy to work with all this crazy cast, and they were entertaining during the shoot and hopefully the movie will also be turned out super fun for the viewers. The movie is awaited by the fans, and the teaser and trailer are supposed to be released soon in the upcoming month. Critics and every fan hope that the movie Bhoot Police stands up to the audience's expectations. We are already excited for the Bhoot Police, and you are also, so stay tuned for updates on the movie Bhoot Police. 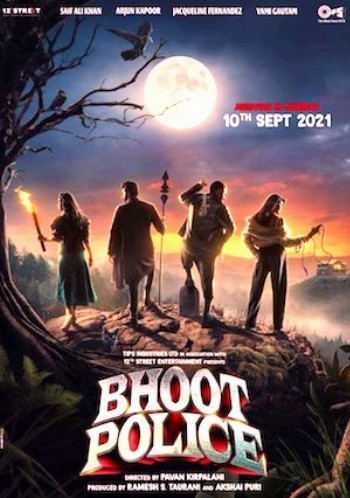