Amazon Prime has come up with a new fantastic movie called â€œ Another Roundâ€. The movie is a comedy-drama directed by Thomas Vinterberg and screenplay by Vinterberg and Tobias Lindholm. The movie premiered on Amazon Prime India on 20 May 2021. The Oscar-winning movie has been first released in some countries like Canada and Denmark in 2020 and gained a huge reorganization. Now in 2021, it is officially premiered once again on Amazon Prime.

Another Round is one of the highly appreciated movies in terms of story, screenplay, acting, comedy, and drama. The movie has won many awards like Best international Featured Film for Academy awards, European Film Award for Best Film, and Best Film Not in the English Language by BAFTA

The story and plot revolve around the four friends who out of boredom decided to have fun in their life by consuming alcohol every day on daily basis and see how it will affect their social and professional life. The four High school teachers decided to go on this new idea of consuming alcohol to see its effect on their lives. From where the story gets really interesting and amusing.

Watch Another Round Trailer

As the movie process, it leaves you in a tragic comedy mood where you laugh at jokes immensely by shedding tears and feel pity for the characters at the same time. The movie hooked the audience and wants more to see in the awe of everything and every possibility that will be happening in the movie. The movie has all of it together. The directions on which some characters grow or fall. All these detailed technicalities show a great impact on the audience's mind. Some other additional points that make the movie so impactful are the acting by the actors make it look realistic and the background score shreds the viewer's emotions.

Another Round is a complete entertainment-packed movie but the soul of the movie is its storyline, Beautifully knitted plot of the movie, Embraced scenes of the characters are very simple but impactful brilliantly acted out by the lead characters. Another Round has an unpredictable storyline bring out by the consumption of alcoholism and fighting over the social norms of alcoholics. Another Round has a great comedy in it but it shows the melancholy of life in tragic scenes in the movie. Overall Another Round is a brilliant movie with a new and fresh concept of life. You can watch this movie on Amazon Prime.

Tags
Previous ArticleVenom: Let There Be Carnage - Trailer took over the Internet after its releaseNext ArticleMoney Heist: Makers announced the release date of Part 5 two volumes 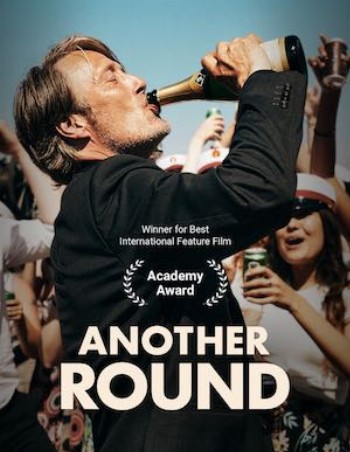 FAQs about Another Round